Here begins The Panoptic’s first episodic review of a TV series. Each week you’ll find a review of the just-aired episode of Game of Thrones, spoilers aplenty (so make sure you’ve seen it!) There’s no guarantee as to who will be writing each week, but our wonderfully talented collection of writers will make sure you get something. Anyway, here’s the first, by Editor-in-Chief, Clare Clarke.

The upcoming season of Game of Thrones has been widely anticipated (as all new seasons of the show are), especially because Jon Snow’s fate was left in the balance last year. The show begins as it ends, with Jon Snow found in the snow by Ser Davos. Bringing Melisandre and Jon together in the same room, the beginning tempts us with the possible return of Snow, only then to scupper our hopes.

The show then turns to my favourite* character Ramsay Bolton mourning, my other favourite** character, Myranda’s death, with Ramsay feeding her to the hounds instead of burying her. Ramsay is then confronted by his father over Sansa’s disappearance, with Ramsay assuring that he will find her. Roose Bolton then discusses his worries about the future of the North against the Lannisters (perhaps not hearing about the recent cull).

The question (if anybody even asked it) of Sansa’s fate after jumping off that wall with Theon is answered as they flee from Bolton’s men, ultimately and rather conveniently running into Brienne and Podrick, who pretty quickly get rid of the threat and have Sansa accepting Brienne’s pledge. – Finally, Brienne has someone else to follow around looking serious. The meeting between Sansa and Brienne is somewhat anti-climactic, partly because the danger to Sansa is never particularly great, and mainly due to Brienne’s quick work of the soldiers. At last, Brienne has concluded her promise to Catelyn Stark back in ‘The Ghost of Harrenhal’, episode five of the second season (THAT’S FOUR SEASONS OF WANDERING AROUND). So, it is a little bit disappointing, and perhaps something that would have been better concluded at the end of season five.

On to Jon Snow. His fate is still left somewhat unknown. While we do see his dead body at the beginning of the episode, it is discovered and protected by Ser Davos, “Onion Knight” and all round babe, along with Jon’s direwolf, Ghost. Ultimately Jon’s body, although ‘dead’, is up for grabs – either by Melisandre’s witchy powers or for inhabitation by a White Walker (or something else, I haven’t looked at the flames recently). This is left with Ser Alliser’s threat that they must surrender by nightfall. Cue some comedic response by Ser Davos for mutton.

“Believe it or not, Arya cannot fight back – she is blind”

The situation in Dorne, is also covered – with Jamie returning to King’s Landing and informing sister (and baby-mama) of their daughter Myrcella’s murder. Generally there’s a lot of murder in Dorne itself, with the death of Prince Doran and his son Trystane, and the general coup d’état staged by Ellaria and her daughters. Long live the matriarchy!***

Elsewhere, Arya has become a blind beggar, but nevertheless, the Waif starts hitting her with a large stick. Believe it or not, Arya cannot fight back – she is blind. Now we patiently await the Daredevil fight scenes in future episodes. (I predict that once she can fight regardless of her blindness, Jaqen H’ghar will return her vision as a gold star for her fighting prowess.) 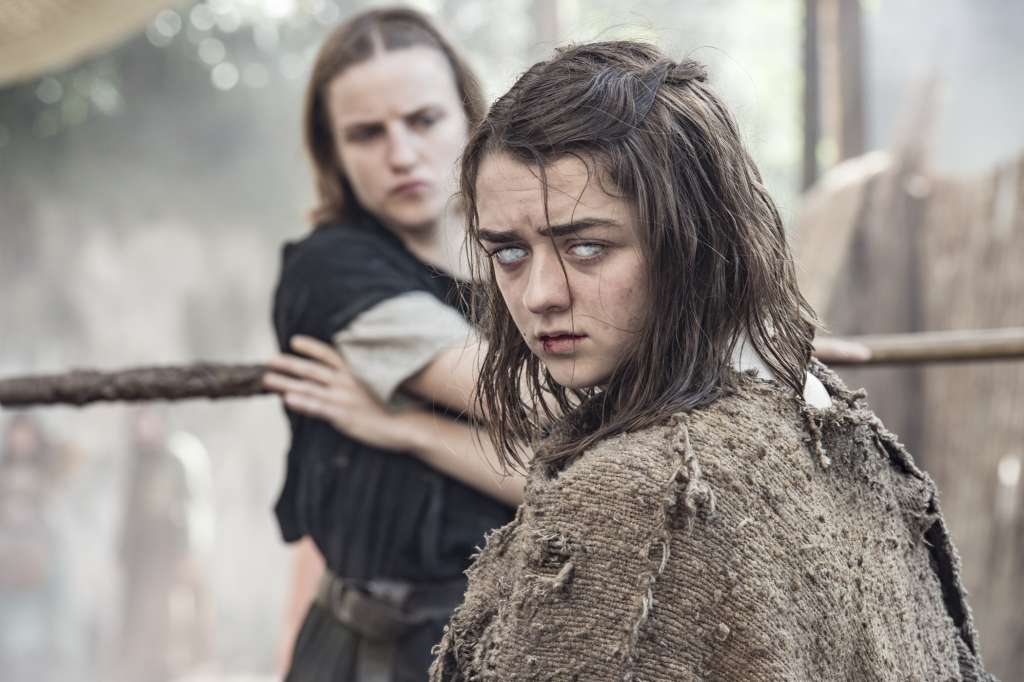 Over in Meereen, with Daenerys still missing, Tyrion and Varys are left to deal with the somewhat devastated city. The devastation caused by the Sons of the Harpy is evident, as well as the repercussions of having a missing Queen, such as former slaves talking about future revolutions. Finally, a whole boat-load (nice – Ed.) of ships are found burning, essentially leaving the two trapped in the city.

To Daenerys! Back with the Dothraki, she is transported as a slave to be given to Khal Moro – it is evident the scars from Khal Drogo’s death are still present within me. As he threatens to rape her, she reveals who she is, but he is basically unimpressed – his offer only changes to forced marriage. When she mentions her marriage to Khal Drogo, he finally decides not to rape her. Feminist within be still. So instead, she is to be taken to the Vaes Dothrak – some sort of harem/nunnery for Dothraki widows. Which does not sound like any fun, and definitely not Daenerys’ sort of thing.

While the episode brought a satisfactory answer to many of the questions left by the end of season five, there was a sense that it covered perhaps too much in too little detail. This means there is no particular cliff-hanger to the episode, except perhaps the revelation of the Red Woman’s true self (the guys watching with me were perhaps less than enthused by her transformation, “where the boobs go?”). While this indicates Melisandre’s loss of faith, this is understandable considering Stannis is dead (?) and she was completely wrong.

It may have been a bit disappointing as an episode, but it was necessary and will clearly lead to an exciting build-up throughout the season only to leave us distraught when the season ends once again all too soon.

**** Bastard son of Robert Baratheon, and hottie blacksmith, last seen rowing around the Narrow Sea at the end of season three, ‘Mhysa’