Once again, Scott Reynolds kindly returns to review this week’s episode of Game of Thrones for us, and once again, we’re very glad to have him.

Last week’s episode of Game of Thrones left a lot of unanswered questions in the air, chief among them: What will Jon do? We left him last week with his betrayers hanged and him declaring his watch ended. However, his trusted friend Edd reminded him that there was another threat looming north of the Wall and tried to convince Jon to stay. It seemed that Jon was ready to leave Castle Black there and then – that was until his half-sister Sansa turned up. After three seasons without any of the Stark siblings knowingly crossing paths, we as an audience were thrilled to finally see them reunited. However, as they confessed themselves, the two were never close and as such, the encounter came across as more than a little awkward. But who can blame them? A lot has happened since they last saw each other in Winterfell, and both of them have changed. As satisfying as it was to see two Starks in the same room together once more, we all know that the real sob-inducing reunion (if it ever happens) will be Jon and Arya, who always had the closer bond.

With Sansa at Castle Black it seems that Jon is intent on keeping her safe and staying with her. That is until she begins to talk of taking back Winterfell… We can’t deny that we would love to see Jon ride with an army of wildlings and take back their home, but the reality seems that they don’t have a strong enough force. At this point, Sansa goes full Lady Macbeth and implores Jon until he finally agrees. She makes the point that the wildlings and the Northern lords will rise with them, adding to their numbers, however we’ve seen that the Umbers and the Karstarks, the two major northern houses after the Starks, have apparently joined their forces with the Boltons. If Sansa really is playing the Lady Macbeth in Jon’s story, it looks as though things aren’t going to turn out too well. But something tells me that Jon will live to fight the real threat of the White Walkers. Like Melisandre said, he is the prince that was promised.

Down south in Kings Landing, the Lannisters are still trying to keep hold of what little of their power remains. Things seem to be looking in their favour, so much so Jaime and Cersei confront their uncle Kevan with a seemingly fool-proof plan – call an army against the Faith to destroy their hold on the city. In a rather out-of-the-blue change of heart, Kevan agrees. His willingness to listen to and actual agreement with the twins comes across as slightly unbelievable, considering his open disdain and lack of respect for them as shown in the previous episode. That factor aside, it will be good to finally see the conflict between the Faith and the Lannisters come to physical confrontation. It almost seems certain that the Lannisters have got their victory in the bag, which is as good as saying that things probably won’t go quite as planned. 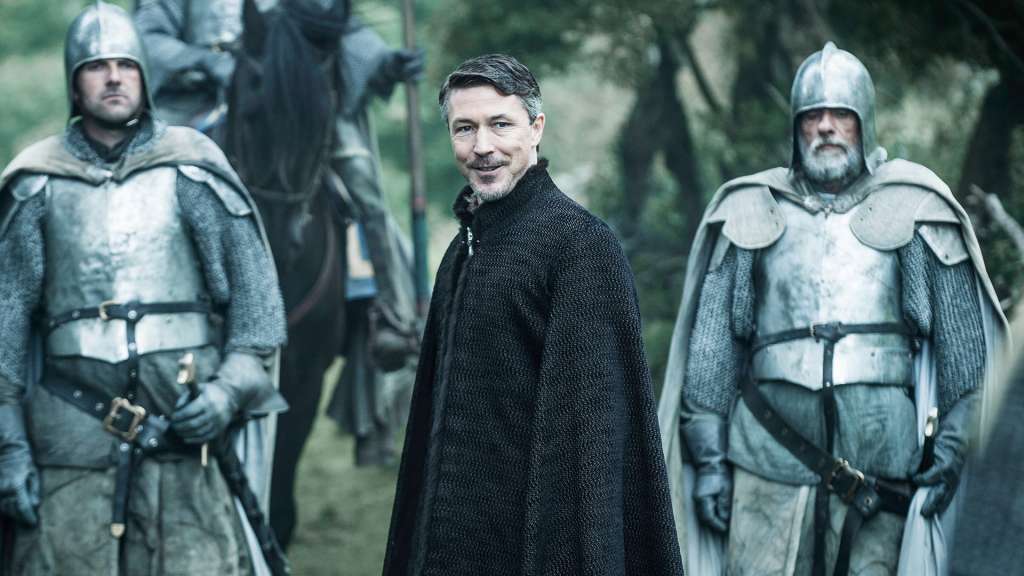 After what seems like a lifetime, Littlefinger, the man we love to hate, makes a reappearance. He returns to the Vale where the less than useless Robyn Arryn is being trained as an elite warrior. Well, not really. The boy was always weak and sickly, and now that he is older we see that he has almost no use at all. Except to someone like Littlefinger, who knows the value of an easily manipulated Lord. Using his trademark cunning, he convinces Robyn to call his banners and march the armies of the Vale north to help bring an end to the Boltons. The Vale commands a large army which has been absent from the previous wars and Littlefinger’s plans have always been steeped in mischief and conniving. Whether or not he truly means to support the Stark’s cause is unknown, but we can be certain that Littlefinger has some tricks up his sleeve.

Meanwhile in Meereen, Tyrion strikes a deal with the leaders of the other cities of Slaver’s Bay. He tries to appeal to their greed and gives them seven years to abolish slavery – the consequence of failing to do so is not revealed. As you can imagine, the former-slave population of Meereen (Daenerys’ trusted counsellors Missandei and Grey Worm included) have their objections. They believe that slavers should not be forgiven and bargained with but rather they should be killed. Although we know, as Tyrion does, that in the real world you have to make unpopular decisions for the sake of peace. We also know that Daenerys hates slavery with a passion, so it will be interesting to find out exactly what she will make of Tyrion’s politics while she has been away.

Apparently we may not have to wait too long to see. Early in the episode, Jorah and Daario arrive at Vaes Dothrak in the hopes of rescuing Daenerys, but they weren’t needed as she had plans of her own. In the final moments of the episode Dany is brought in front of the Dothraki Khals to hear her fate. After a lot of talk of rape, she finally has enough and takes control of the situation. While in a highly flammable hall, she tips over the fire pits and burns the Khals alive, watching unharmed all the time. Much like in the finale of season one, Daenerys emerges from the great flames, unburnt, to kneeling Dothraki. This time however, her new Khalasar is thousands strong as opposed to her original few dozen – also this time, no dragons. But the lack of dragons on this occasion doesn’t take away any impact regarding what this means for her. Once again she has an army of loyal Dothraki at her side, enough to make a stand against Slaver’s Bay and quite possibly take on the Iron Throne. And let’s not forget those dragons.

With the first three episodes answering most of the show’s major questions, it was difficult to see where the show would go so early on in the season. However, after watching episode four it’s clear that we’re just witnessing the calm before a great storm. A storm that we hope to see come crashing down upon us in the second half of the season.