This week’s review of Game of Thrones has been conceived at the hands of Pete Bartholomew, a name we hope to see more from at The Panoptic. It’s a detailed review with much to say, so I’ll not distract any further from it.

The fifth instalment in Game of Thrones’ sixth season has an intriguing name. The previous four episode names have all been relevant to the storyline: ‘The Red Woman’ revealed Melisandre’s true age; ‘Home’ referred to both the return of Theon and Euron Greyjoy to the Iron Islands, and Bran’s vision within Winterfell; ‘Oathbreaker’ alluded to the Umber’s betrayal of Rickon Stark; and ‘Book of the Stranger’ was a reference to the Lannister plot to kill the High Sparrow and revoke the power of the Faith. The title of this episode, ‘The Door’, leaves the viewer with more questions than answers as to its contents. The episode, however, does not disappoint.

It opens with Sansa confronting Littlefinger, asking him if he knew about Ramsay’s monstrous nature when he married her to him. Sansa, who appears to have discovered what a spine is in season six, threatens to have Brienne kill Littlefinger, a hollow threat, but one that demonstrates to Petyr that she will no longer be a pawn in his game of thrones.  Littlefinger then tells Sansa of her great-Uncle, Brynden Tully, otherwise known as ‘The Blackfish’, who is massing those who remain loyal to the Tullys at Riverrun. This seems to be Littlefinger’s attempt to apologise to Sansa for marrying her to Ramsay by giving her access to a second army with which to defeat the Boltons (although one can never be sure what is going on inside the head of Petyr Baelish and for all her new-found boldness, Sansa may yet again unwittingly play the part of pawn).

“Upon waking, Bran discovers he has well and truly ballsed up”

The following scene opens to an image viewers are becoming all too familiar with: Arya getting her arse kicked by the Waif. Jaqen H’ghar then instructs Arya to kill an actor at a local playhouse, stating ominously, ‘A girl has been given a second chance; there will not be a third. One way or another, a face will be added to the hall’. The play turns out to be a rather Shakespearean depiction of King Robert’s death and Ned Stark’s subsequent execution, something which visibly upsets Arya. Nevertheless, Arya makes a recce of the habits of the actor she has been sent to kill, looking for a way to kill her, seemingly unfazed. This scene also provides the second cock-shot of the season, something Emilia Clarke (Daenerys) is probably pleased about. When Arya later asks Jaqen H’ghar about the woman she was sent to kill, he questions her suitability to serve, telling her that servants do not ask questions. This scene seems symbolic as it presents Arya – or rather ‘No One’ –with an image of her past life. The fact that this image, which should be quite upsetting for her, does not prevent her from doing her job, shows through a clever use of symbols that Arya is indeed making the transition from Arya Stark to ‘No One’. Perhaps episode six will finally see Arya’s story move away from getting repeatedly beaten up with a wooden staff, which, while proving a point about the dedication and tedium involved in her training, could understandably be seen as boring by easily distracted viewers. 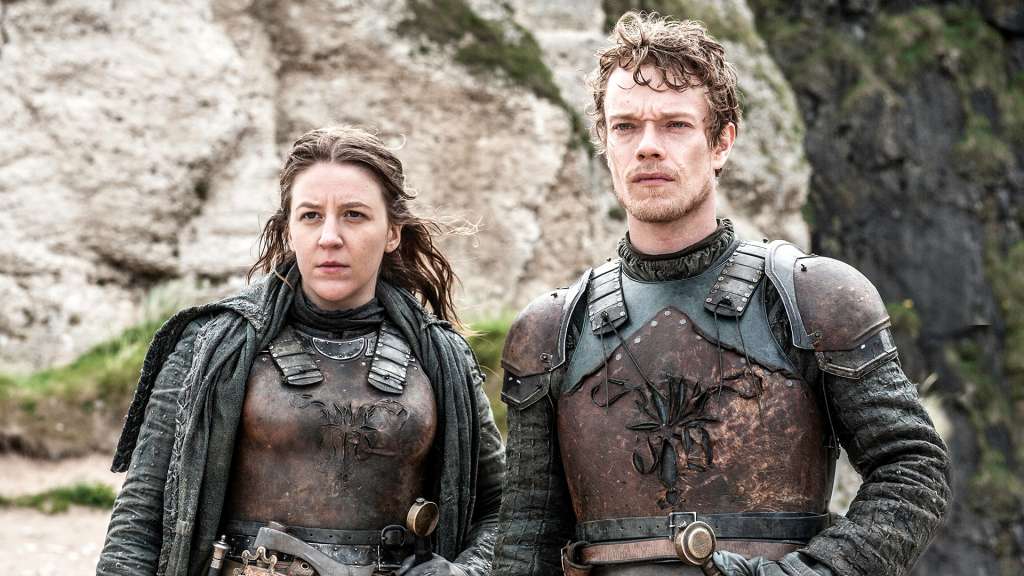 A brief shift to one of Bran’s visions shows the Children of the Forest apparently sacrificing a man. When one of the Children plunges a stone blade into the heart of the man, his eyes turn bright blue. Bran (and the viewer) comes to the realisation that he has just witnessed the ‘birth’ of the Night King, the leader of the White Walkers. When he confronts Leaf about this, asking why they created the Night King, she replies that it was to fight the humans who were destroying their land. Bit of a guilt trip, but fair enough. A later vision sees Bran walking among an army of wights seemingly unnoticed, as in previous green dreams. Seemingly being the operative word, as the Night King appears and grabs Bran’s arm. Upon waking, Bran discovers he has well and truly ballsed up and the Night King now knows where he is and is on his way to get him.

The following scene sees the return with a vengeance of the Iron Islanders, as they meet to conduct a Kingsmoot to decide who will rule the Islands following Balon’s death in episode 3. Having played only a subsidiary role in the plot line of season six thus far, it is good to see the Iron Islanders now in a more prominent role. Yara presents her case to rule the Islands, which is faithfully supported by Theon. Cue Euron, who admits to killing Balon because all he was doing was holding the Ironborn back. Euron ridicules Theon for being a eunuch and dismisses Yara’s claim on account of her being a woman (sexist, I know, but what did you expect from a show described by a cast member as ‘only tits and dragons’?), stating that if the Islanders select him as their King, he will sail to Essos and provide Daenerys Targaryen with a fleet (and his cock) to aid her in taking the Iron Throne – a claim on which he is chosen to be King. He is subsequently rather graphically ‘drowned’ as Iron Island custom dictates, during which time Yara and Theon flee the islands. Euron is shown to be a strong and ambitious character, whose mental state borders on lunacy, a trait which always makes for interesting developments in Game of Thrones. The injection of such a tenacious, power-hungry psychopath at a time when supremacy throughout Westeros (and Essos) is so hotly contested is exactly what the show needed to crank the tension up a notch. The Iron Islanders and Euron in particular will have an important role to play: watch this space.

“Sexist, I know, but what did you expect from a show described by a cast member as ‘only tits and dragons’?”

Daenerys has only a brief appearance this week following her triumphant (and nude) final scene in the previous episode. Jorah shows Daenerys the greyscale he has been hiding since back in Season 5, bringing about a rather soppy confrontation between the pair which results in Jorah confessing his love for her and Daenerys commanding Jorah to find a cure for greyscale and heal himself. Eurgh. This scene comes across as a rather unnecessary afterthought and is a low point in an otherwise fantastic episode. It also goes a long way to undoing the image of Daenerys as a strong leader which was posed in the final scene last week, although this is perhaps to illustrate that she is indeed still human and not a dragon.

Back in Mereen, Tyrion’s plan to phase out slavery slowly appears to be working and hostilities have simmered down. Tyrion and Varys proceed to give an audience to a new character, Kinvara, the High Priestess of the Red Temple of Volantis – essentially, Melisandre’s boss. She offers to help Daenerys, as she sees her as ‘The Prince(presumably –ess?) that was Promised’. Varys wryly reminds her that Stannis was once said to be this figure and that he has already been defeated twice, and brands Kinvara a fanatic. She reminds Varys of how he became a eunuch, alluding that she knows more about him than she is letting on, something which shuts Varys up pretty quickly. This development has the potential to take the Mereen storyline in an interesting new direction, something it is in dire need of following its stagnation so far this season. Could we see a Targaryen-Greyjoy merger promoting R’hllor?

Back at Castle Black, Sansa and Jon talk tactics with Brienne, Edd, and Davos, whilst also questioning the loyalty of the various houses of the North. Sansa proposes the idea of uniting with the Blackfish against the Boltons, concealing that Littlefinger had told her this information. Sansa then sends Brienne off to the Riverlands to see the Blackfish and gain his allegiance. This development will see the return of the only survivors of the Red wedding, Brynden and Edmure Tully, as well as presumably the return of the treacherous and highly-fertile Freys, likely next episode. Brienne questions Sansa about why she didn’t tell Jon about Littlefinger, although Sansa’s answer is not shown. The scene then cuts to an awkward encounter between Jon and Sansa – highlighting again the pair’s lack of small-talking ability – during which Sansa gives Jon a cloak styled after Ned’s. This seems to be Sansa’s way of accepting Jon as a Stark, as the cloak is made of a wolf pelt and is styled after the one their father wore.

And now, for the finale. While Bran and the Three-eyed Raven are in another green dream at Winterfell, complete with young Ned Stark and young Hodor, the Night King and his army of wights make their assault on the tree. The Children of the Forest create a ring of fire around the tree with some more of the mysteriously flammable rocks from season four – seriously what’s up with those? – but this does little to stop the advance. A fight ensues in the cave beneath the tree during which, Meera kills a white walker, and the Three-eyed Raven is killed. Bran, hearing the fight from within his dream, wargs into Hodor and picks his own (Bran’s) body up and flees with Meera and Leaf.  Summer takes on the wights and is killed while the others escape, making him the second direwolf to die this season, leaving only two alive from the original six. Leaf uses another mysteriously flammable rock to blow up a large portion of the wights, giving Meera and Hodor more time to escape, killing herself in the process. Meera and Hodor head toward a door at the end of the tunnel they are fleeing down. A door?! A door. Here comes the symbolism again. They reach the door with the wights hard at their heels and Hodor slams the door shut while Meera runs off into a blizzard carrying Bran and screaming at Hodor to ‘Hold the door’. Simultaneously, young Hodor in the dream (through whom Bran is controlling future Hodor in some sort of inception-style shit) begins to have a seizure, also screaming ‘Hold the Door!’, which becomes ‘Ho..the..door’, which become ‘Ho…dor’. It seems a shame that we are only given Hodor’s backstory, something that has baffled viewers from the very first episode, in the character’s final episode, moments before he is killed by the oncoming wights. Even so, a brilliant finish to a brilliant episode. RIP big man.

(Don’t expect these odd ratings to become a thing. Ed.)