Week 6 of our Game of Thrones episodic series of reviews comes from Pete Bartholomew, who reviewed last week's episode 'The Door'. Once again, expect a detailed review with lots to say.

The naming of episodes continues to be a good indication of what viewers can expect from them. This week’s episode has a family theme to it, with Blood of my Blood being a phrase viewers may remember from its use in Dothraki circles: Samwell Tarly returns to Horn Hill, his ancestral home; a Tyrell army marches on King’s Landing in an attempt to prevent Margaery’s walk of atonement; a Lannister betrays their family; Daenerys takes stronger command over the Dothraki; and there is another long-overdue Stark reunion.

The episode begins where it left off, with Meera dragging Bran away from the Weirwood cave and into the forest pursued by wights. It seems Hodor’s heroic attempts to ‘Hold the Door!’ did not prevent some of the wights from catching up to Meera and Bran again. Bran is still in his dream-state and sees flashes of scenes from previous seasons, as well as a fleeting glimpse of ‘The Mad King’ Aerys Targaryen, and another of what appears to be a wildfire explosion. While little is made of this in the scene, the only brush we have had with wildfire so far in the series is at the Battle of the Blackwater back in season 2, and this vision is clearly not related to that. This poses two possibilities: the first of which is that a future episode will depict Aerys murdering Rickard and Brandon Stark (Ned’s brother, not his son), something which Jaime alluded to in a discussion with Ned on his arrival in King’s Landing all the way back in the first season. The other possibility is that this could be a premonition, as we are aware of – again thanks to Jaime, this time in season 3 – a cache of wildfire stored under King’s Landing. Just as the wights are about to fall on Bran and Meera, a mysterious hooded figure wielding a flaming flail comes to their aid and helps them escape.

“Tommen is an exception to those characters showing… well, character, this season”

Although many probably worked out the identity of this figure, the big reveal was left for a later scene. The hooded figure eventually reveals himself to be – for those who were too slow to grasp it in the earlier scene – Benjen Stark, Bran’s uncle, missing and presumed dead north of the Wall. He details how the Children of the Forest put a shard of dragonglass into his heart to prevent him becoming a wight, seemingly the reverse process of the one Bran and the Three-eyed Raven witnessed last week which produced the Night King. He then tells Bran to head for the Wall and await the Night King. This development allows the possibility of three Starks at the Wall, or perhaps a third near-miss between Jon and Bran. His return after 52 episodes of absence is likely to primarily consist of Bran and Meera’s protector north of the Wall, now that Hodor is dead.

The next scene gives us our first glimpses of Horn Hill, the Tarly seat of power. Gilly becomes upset with Sam when she finds out he hasn’t told his family that she is a wildling, but agrees to stick to the story that she is in fact from south of the Wall. Confusingly, Horn Hill looks like some kind of Mediterranean palace, which, while perfectly acceptable considering its location in the temperate climate of the Reach, is quite a contrast to the more traditionally shaped castles we have encountered so far in Game of Thrones. Sam’s mother and sister greet Sam, Gilly, and Little Sam with warmth, although as Randyll and Dickon Tarly (Sam’s father and brother) are out hunting, the viewer must wait to see how the slightly less warm reception of Randyll will unfold. Gilly is dressed up by Sam’s sister Talla in a formal dress, in which Gilly walks rather awkwardly like some kind of puppet, but does look the part.

In a later scene, over a rather awkward dinner, we are introduced to Randyll Tarly, a brooding, stern looking man of few, gravelly words. That is until Gilly lets slip her wildling origins, prompting an implicitly threatening speech from Randyll about Heartsbane, the Tarly’s dynastic Valyrian steel greatsword, and how Sam is unfit to wield it – this is followed by Randyll telling Sam to leave Horn Hill and not to return. Sam leaves, secretly taking Gilly and Little Sam with him, and stealing Heartsbane in a rare bold action. It’s as if everyone has discovered their spines this season. The casting of James Faulkner to the role of Randyll is a very good decision, and he very adeptly portrays the temperament that Randyll is supposed to possess. One minor note amongst all this is that no one questions that Little Sam is in fact Sam’s son, despite the fact that the child has blonde hair and both the ‘parents’ do not. You’d have thought people would have learnt from the whole Baratheon bastard saga. 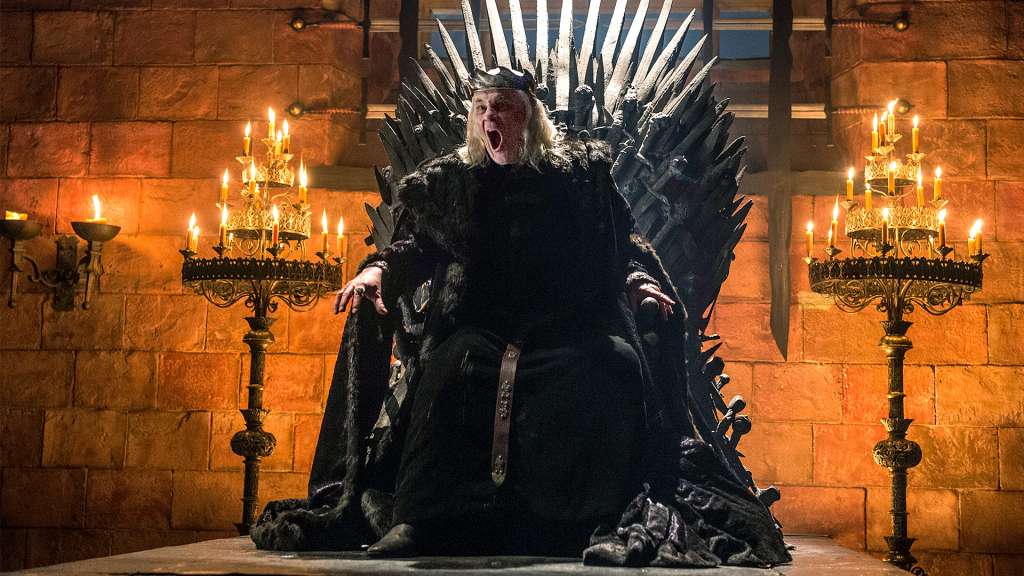 Tommen is an exception to those characters showing… well, character, this season. The first King’s Landing scene for a couple of episodes sees the King of Westeros manipulated by first the High  Sparrow, and then by his wife Margaery, into supporting a union of the Faith and the Crown. Meanwhile, Mace Tyrell has marched his army to King’s Landing in order to save both of his children (Loras and Margaery) from the accusations of the Faith against them. The attempts of Mace and Jaime to prevent Margaery’s walk of atonement are successful, but in acting against the Faith, Tommen concludes that his uncle (sorry, father) has acted against the Crown, dismissing him of his duties as Lord Commander of the Kingsguard and sending him to treat with the Blackfish in the Riverlands instead.

In manipulating Tommen, the High Sparrow has been able to both strengthen his position of power and simultaneously weaken and embarrass those who oppose his role, chief among which are Cersei and the now ousted Jaime. Cersei, for once, actually acts as the voice of reason, telling an apoplectic Jaime not to march into the Sept of Baelor and kill the High Sparrow, continuing that they will gain their revenge another day. This scene is important in the grand scheme of things as it shows us the Faith has the ear of the weak-willed King, suggesting that they will continue to play a major role in this season’s final four episodes. In addition, Jaime’s dismissal from his position of Lord Commander would now make him Lord of Casterly Rock, meaning that Tommen has given a great deal of his power to both the High Sparrow and his uncle/father at his own expense – something which will likely spell his downfall towards the end of the season.

Back at the playhouse in Braavos, we see a scene from the same play as before, although this time it is depicting Joffrey’s death. The actor who plays Sansa can be seen in the wings mouthing the lines of Lady Crane, the actor playing Cersei, something which confirms to Arya that she, out of jealousy, is the one who paid for the assassination she is supposed to be carrying out. Arya sneaks behind the stage and slips poison into Lady Crane’s drink, although her change of heart and subsequent revelation to Lady Crane that her fellow actor wants her dead demonstrate that Arya’s plotline will be taking a different, and rather more difficult, direction for her from now on. The Waif, watching from her hiding spot behind the scenes, reports Arya’s failure to Jaqen, who gives her permission to kill Arya. The maniacal, almost gleefully sadistic look on the face of the Waif indicates that we will very soon have a showdown between Arya (or Mercy as she called herself when talking to Lady Crane) and the Waif that will leave only one survivor.

“Walder Frey returned to the fold this week after a two season hiatus, complete with a wife young enough to be his granddaughter”

As predicted in last week’s review, Walder Frey returned to the fold this week after a two season hiatus, complete with a wife young enough to be his granddaughter. His anger towards his men for losing Riverrun to the Blackfish gives us some context about how the Blackfish came to regain his ancestral home, with the conversation also including mentions of other houses and the Brotherhood Without Banners’ defiance of the Freys and pillaging of their supply trains. Frey gives his men Edmure, the only other surviving Tully, and instructs them to use him as leverage against his uncle. The return of the Freys and Edmure, combined with Jaime’s dispatch to the Riverlands, sets up an interesting string of events for the next episode: it seems highly likely that next week will feature a siege at Riverrun and a return to our screens of the Brotherhood Without Banners (Thoros of Myr has been confirmed to return). A Jaime-Brienne reunion is also on the cards, as both will be heading to Riverrun, with a snippet from the sixth season’s promotional video showing Bronn and Podrick, who are with Jaime and Brienne respectively, in the same scene.

The episode culminates in a return to Essos and Daenerys, with a much stronger showing from the Mother of Dragons than in last week’s episode. Leading her new Khalasar away from Vaes Dothrak, she discusses how many ships it would take for her army to be transported to Westeros, unaware that she may soon be getting her wish. Spotting Drogon in the distance, Daenerys rides off, returning a short while later astride Drogon to give a rousing speech to her seemingly terrified Khalasar in Dothraki. The fact she stated that a Khal usually has blood riders made it seem as if she was going to name two ‘dragon riders’, but unfortunately this was not the case, making a seemingly impressive speech slightly less so than it could have been.

All in all, this episode is hard to fault, but not as exciting as the previous week. It played more of a role of setting up the final four episodes of the season, which it seems are likely to be much more fast-paced and exciting than the early episodes of this season.