Episode 9 has been a much anticipated event in this season of Game of Thrones, with the interest of many being piqued by its title. We engaged the services of Pete Bartholomew once more to guide us through this bloody penultimate hour.

The title of this week’s episode, the ‘Battle of the Bastards’ gave a fairly clear indication to viewers of what to expect from the episode: the highly-anticipated battle for Winterfell between Ramsay Bolton (Snow) and Jon Snow. The episode opened, however, where the previous one left off, with Daenerys having returned to a besieged Meereen.  Daenerys’ triumphant seizure of the Dothraki Hordes earlier in the season appears to have emboldened her character, while Jorah Mormont’s departure from her side has also seen the withdrawal of her more sentimental characteristics. The result of this is demonstrated when she begins to detail to Tyrion how she will burn the cities of her enemies to the ground and kill every last member of her enemies, finally displaying some intent to abide by the Targaryen words –“Fire and Blood”. Tyrion reminds her of how her father had a similar attitude when the Lannister army was at the gates of King’s Landing during Robert’s Rebellion, and how this indifference to wanton destruction was ultimately the cause of his death and is ultimately successful in persuading her to take a more moderate approach towards the slavers. This divergence from Daenerys’ reputation for being a mother-like figure shows a shift in her attentions away from Mereen and Essos, towards Westeros, signalling her likely return to the western continent next season.

Daenerys meets the Slavers to negotiate surrender, although the Slavers only become aware that it is their surrender being negotiated when Daenerys demonstrates the destructive capabilities of her three dragons on the Slavers’ fleet.  Ordered to choose one of them to die, the three Slavers squabble, submitting the lowest-born of the three for the punishment of death. Instead, the two Slavers of higher birth are executed, with the survivor serving as a messenger to tell the other Slaver’s of the might of Daenerys’ Meereen. After this, Daenerys holds an audience with Yara and Theon, who have finally made it to Meereen with their hundred ships of the Iron Fleet in tow. They pledge allegiance to Daenerys on the condition that she grants them the Iron Islands and helps them to kill Euron, to which Daenerys obliges. Following last week’s episode in which it was shown that Yara has a fairly liberal sexual attitude, there appears to be a particularly flirtatious sexual tension between Yara and Daenerys, although it is doubtful that anything will develop from this. Daenerys’ ability to act forcefully when required (against the Slavers) and make friendships with useful allies (the Greyjoys) shows a development in her character from the naïve girl we were presented with in the series’ debut episode to a more astute warrior queen, albeit with much still to learn. 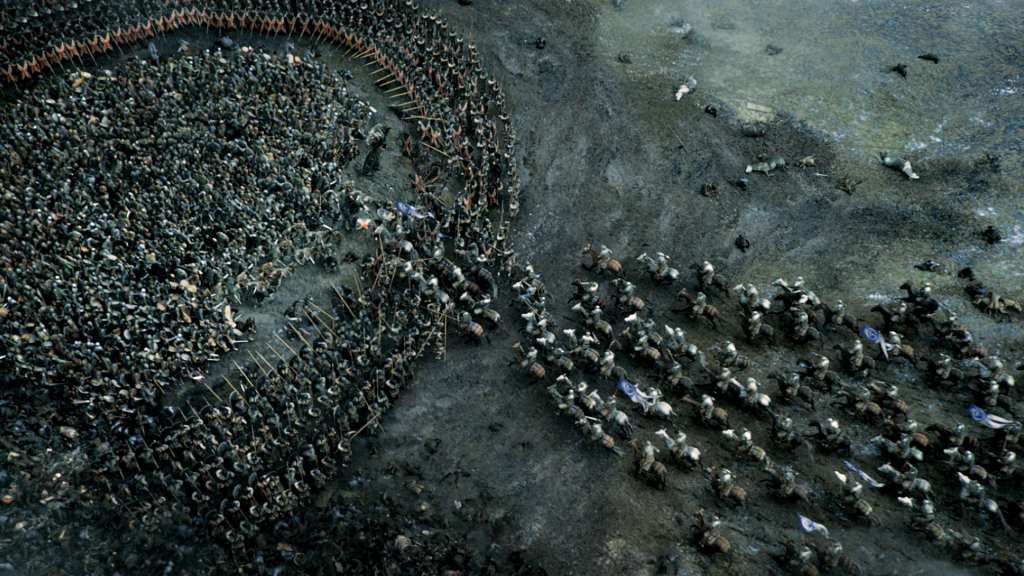 Now, to the subject of the episode title: the Bastards. Perhaps as much as eighty percent of the episode is set aside for this development, and it is clear that HBO have found some money down the back of their metaphorical sofa because there is a great deal of CGI used in this episode, both in the battle, and at Meereen. Prior to the battle there is a meeting of the two sides’ generals, during which curt words are exchanged. This exchange between Jon, Sansa, and Ramsay is necessary to remind the viewer that Ramsay still holds Rickon hostage and also to demonstrate Ramsay – who refuses to fight Jon in single combat – as a coward. It does, however, feel a touch laboured and cliché, and while it takes little away from the episode, it does nothing to add to it. Sansa becomes annoyed when Jon doesn’t ask her advice in his war council but when he does ask for advice, she provides nothing of any substance, and while the point of the scene is clear – to indicate that Sansa is no longer a little girl – this scene seems mildly pointless and a source of poor writing.  Ramsay, while able with words, is much better deployed in his role as a sadist. The scene prior to the battle sees the two armies square up opposite each other and Ramsay release Rickon and tell him to run back to Jon, while he takes pot shots at him with a longbow. Jon rides out to meet Rickon but the youngest Stark is brought down by an arrow agonisingly short of reaching Jon’s protection, initiating one of the bloodiest scenes in Game of Thrones to date.

The ensuing battle scene is a resplendent sixteen minutes long, complete with the devastating deployment of the giant Wun Wun by Jon’s army and a Roman-style shield array movement from the Bolton army. Ultimately, Jon’s army is outnumbered and penned in by the Bolton shield array, and all seems lost, until the arrival of the Knights of the Vale under the control of the ever-calculating Littlefinger, to whom Sansa had written previously requesting assistance. The forces of the Vale trounce the remainder of the Bolton army, forcing Ramsay back to Winterfell, where he is easily beaten in single combat by Jon, despite Jon only having a shield to Ramsay’s bow and arrows. Ramsay is bound and placed in the kennels of Winterfell where he meets the grisly death many viewers desired at the hands of his infamous hunting dogs, a plan of Sansa’s concoction. The battle scene is chaotic, but in such a way that it amplifies the desperation of the soldiers and the deplorable nature of warfare; there is certainly no glorification or romantic image of battle portrayed anywhere in this episode. This gives a certain sense of realism to the scene, with no sugar-coating and the horrors of war plain for all to see. The cinematography is fantastic and a testament to the brilliance of the series’ directors and choreographers. The final showdown between Ramsay and Jon was a little disappointing and over all too quickly, with Jon acting rather out-of-character at the beginning of the battle after Rickon is killed, charging at the Bolton’s by himself – although this can probably be attributed to Jon’s devotion to his family. Aside from these two points, little can be faulted about the Battle of the Bastards.

One small point to note is Ser Davos’ discovery of the site where Shireen was sacrificed to R’hllor (burned to death) at the end of last season. Nothing much is made of this, although it seems a strange scene to include if it has no significance. Perhaps this is intended to symbolise the failures of Stannis’ campaign to capture Winterfell, although Davos has never liked Melisandre which could mean that this scene is setting up a confrontation between the two at some point in the future.

Overall, the episode is a good one but not quite good enough to be attributed the highest marks available. While the episode itself was very exciting to watch, with the majority of the episode depicting action-packed battle scenes, the quality of the dialogue appears to have been sacrificed in favour of ensuring an aesthetically exciting episode. The diminished quality of the writing with respect to the rest of the season limits the maximum score this episode can be given but it is a thoroughly exciting episode to watch that lives up to its billing.