The Winds of Winter – Game of Thrones

The end of the season rolls around, to the disappointment of many, I'm sure. We employed Pete Bartholomew once more to guide us through the dramatic, and undoubtedly fantastic finish to this fueled sixth season of Game of Thrones.

The season six finale, ‘The Winds of Winter’, shares its name with the long-awaited (and still pending) sixth instalment in A Song of Ice and Fire from George RR Martin. At 69 (lol) minutes long, this episode is the longest episode of Game of Thrones ever. It needed to be as well, since the previous episodes of the series left a lot to be rounded off. The episode came out swinging.

The episode begins in King’s Landing, where the trials of Loras Tyrell and Cersei Lannister are about to take place. Loras admits his ‘crimes’ and pleads to dedicate his life to the Faith as repentance; an offer the High Sparrow accepts. The seven-pointed star of the Faith is then carved into Loras’ head, to the disgust of Mace Tyrell. Cersei and Tommen are notably absent from the Sept of Baelor, in which the trial is taking place, a fact which is not lost on Margaery, who, realising that something is amiss, attempts to leave the Sept but is refused. This early part of the episode is comprised of short scenes from different locations within King’s Landing – the Sept of Baelor; the solars of the King and of the Queen Mother; and the areas beneath the city – overlaid initially with soft but ominous piano music, which is then combined with increasingly-dramatic string music. The scenes from the other locations are ordered in such a manner as to make the Sept the primary focus but to illustrate other important actions taking place around the city. This format assembles the first twenty minutes of the show, and brilliantly builds up an atmosphere of powerful suspense for the viewer. Any incidence of such calm and tranquillity in Game of Thrones as is displayed here should always be an indicator of the imminence of explosive developments. Explosive, in this case, being the operative word.

“the perfect way to wrap up the sixth season, with death, destruction, revelation, alliances, and betrayal”

The scenes beneath King’s Landing show first Pycelle and then Lancel lured into the catacombs and murdered by Qyburn’s informants. As he lies dying, Lancel unwittingly discovers the crux of Cersei and Qyburn’s cryptic exchange (noted by Clare Clarke in her review of No One): an enormous cache of wildfire beneath the city (as I predicted in my review of Blood of My Blood) about to be triggered. The explosion of the cache of wildfire completely eviscerates the Sept of Baelor, killing a number of highly influential characters: Kevan Lanister; all the Tyrells bar Lady Olenna, who had fled the city; and (to the joy of many, no doubt) the High Sparrow, to name the most high profile casualties. Cersei’s maniacal smile as she watches from the Red Keep gives the viewer no doubt as to who is behind it all. The hardening of Cersei’s resolve is reinforced in a subsequent scene in which she is seen gleefully mocking Septa Unella, embarking upon one of the best and most sarcastic monologues of the entire series, before leaving her to become the Mountain’s play-thing, not something to be wished upon anyone. Tommen is less pleased about what happened at the Sept and, after removing his crown, throws himself from the top of the Red Keep. While Cersei must be used to her children dying by now, the degree of apathy in her reaction to his death is still surprising.

The confrontation between Davos and Melisandre regarding Shireen’s death predicted in last week’s review came to fruition this week, causing Jon to exile her to the South on pain of death. Littlefinger demonstrates his evident cunning and elucidates his sole desire: to place himself on the Iron Throne with Sansa at his side. A little bit creepy considering he’s old enough to be her father but it’s on the milder end of weird for Game of Thrones. He has clearly taught Sansa too well, who plays hard-to-get with Petyr, not to be fooled by his flattery. Littlefinger’s attempts to pit Sansa against Jon by telling her that she should rule the North appear to have no effect, but undoubtedly such ideas will fester and awaken Sansa’s former dislike towards Jon. While the other Houses of the North unite behind Jon as their new ‘King in the North’ following a rousing speech from the ten-year-old Lady Mormont, Sansa worriedly notes Littlefinger’s lack of support, perhaps fearing for what will become of Jon for Littlefinger’s plans to succeed. 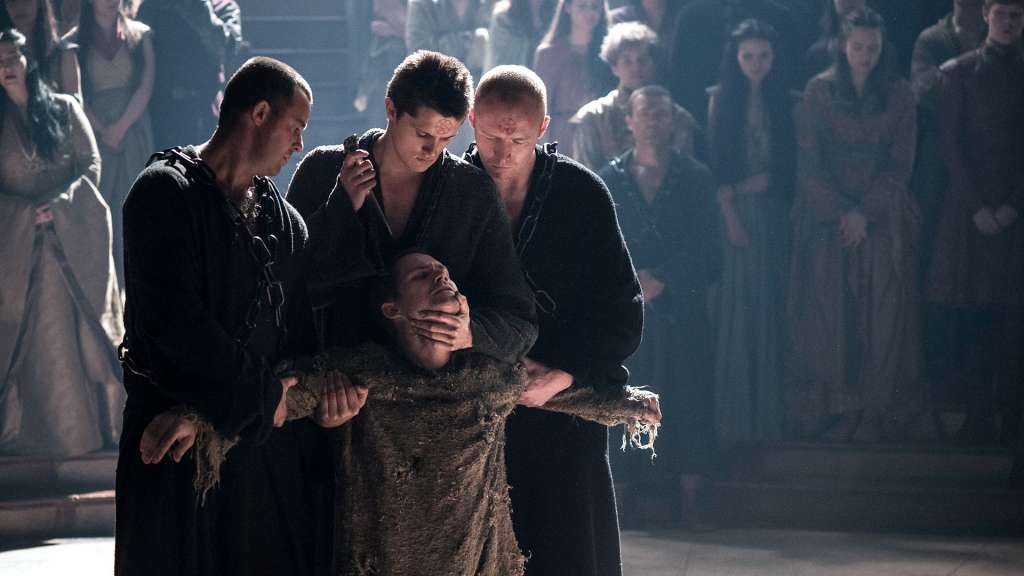 Sam Tarly finally makes it to Oldtown, and although little is made of this in the episode, it is likely that Oldtown will feature more prominently in the seventh season.

Clearly not content with killing off a plethora of major characters this episode, a visit to The Twins sees a kind of reverse-Red Wedding in miniature form. Walder Frey, sitting in his hall by himself, asks a serving girl where his sons are as they were supposed to be meeting him at midday. When the serving girl replies that they are already in the room, Walder seems confused until he removes the lid of the pie he has just been served to reveal a human finger. Arya, having made good use of her faceless man training, reveals herself and promptly slits his throat, striking another name from her list. While some of the more eagle-eyed viewers might have spotted that the camera had been focussing on that particular serving girl rather a lot in an earlier scene at The Twins, it undoubtedly still shocked the majority of viewers. This scene not only removes one of the most despised characters of the series, but also gives Arya’s character new direction in Westeros next season to replace her rather stagnant, albeit necessary, storyline in Braavos this season. While the whole pie business is frankly revolting, it just serves as another reminder of how much of a psychopath you need to be in order to succeed in Westeros.

Bran, Meera, and Benjen reach the Wall, where Benjen turns back and bids them farewell. Through the medium of his ‘green dreams’, Bran provides viewers with the answers to a question that has remained unanswered since the very beginning of the series: the identity of Jon Snow’s mother. The dream shows Ned bursting into the Tower of Joy to find his sister Lyanna in bed and bleeding profusely, having recently given birth. ‘Not more incest?’ I hear you cry with despair. Nope. Not this time. Lyanna pleads with Ned to keep her baby safe, stating that if Robert finds out, he will kill the child. While this is never specifically stated, this is a fairly strong indication that Jon is the son of Rhaegar Targaryen and Lyanna Stark, a volatile mixture which is sure to create anarchy when it comes to light. At the very least, Ned’s incredulity demonstrates that he had been lying about Jon’s parentage to protect him. This development makes Jon, unbeknownst to him, the rightful heir to the Iron Throne, if he is not Rhaegar and Lyanna’s bastard son, to which it is not alluded, creating another possible challenger for Daenerys.

“While the whole pie business is frankly revolting, it just serves as another reminder of how much of a psychopath you need to be in order to succeed in Westeros”

In the aftermath of the earlier events at King’s Landing, Jaime and Bronn return to find Cersei being crowned Queen. Her view is stern and resolute towards Jaime, and she seems to show little remorse at the death of her final child, with no love being exchanged in the look between the pair. Cersei becomes Westeros’ first queen, something most viewers had probably assumed would be reserved for Daenerys. Cersei clearly has no interest in giving up the throne without a fight, and the loss of her love for her children, perhaps her one redeeming quality, will make her a very dangerous character. A brief shift to Dorne shows the potential for a Targaryan-Dorne-Tyrell alliance next season, with Ellaria Sand and Varys offering Lady Olenna “vengeance, justice…fire and blood”. This is made to look more likely as the episode goes on, as Daenerys prepares to depart Mereen, leaving Daario and his sellswords to control the city. The closing scene shows panning images of the Dragon Queen and her newly acquired armada setting out across the Narrow Sea in triumphant fashion. Finally, after six long seasons of dealing with seemingly unimportant Essos storylines, it appears that Daenerys will return to try and claim the Iron Throne. Perhaps that’s why so many characters have been killed-off, in order to finance the dragons for next season.

This episode was the perfect way to wrap up the sixth season, with death, destruction, revelation, alliances, and betrayal. Much as with last week’s episode, the cinematography and use of music in the episode is fantastic. The episode, as the previous one, was directed by Miguel Sapochnik, and this episode highlighted that, contrary to my disappointment at last week’s lacking dialogue, Sapochnik is equally capable of producing a brilliantly written episode. While it could perhaps be considered to be a shame there was no mention of the Night King (which could have been expected from the title), there were references to the ensuing winter throughout, and the mood of the episode was decidedly dark. Overall, it does not seem unreasonable to propose this episode as the best episode of the entire series, let alone the season. A deserving end to a fantastic season.