The Science of Friendship

The formation of lasting friendships is often thought of as a uniquely human quality – however, significant amounts of research have found this assumption to be untrue.

In fact, studies have shown that a number of different species also exhibit behaviours similar to that which we would classify as friendly. Whilst the precise reasons for this are still under speculation, there is likely to be a cross-species evolutionary drive towards forming buddies.

Investigations into chimpanzee behaviour in Uganda and the Ivory Coast led Catherine Crockford and her team to come to the surprising realisation that the monkeys tend to form bromances, of sorts. By exhibiting cooperative behaviours such as sharing food and grooming each other, the primates form strong, long-lasting same-sex bonds. These alliances help lower the social stress experienced during aggressive confrontations, enable the chimps to outcompete those without friends when it comes to food, and have even been shown to correlate to an increase in their average life expectancy!

Skipping through to later in life, elderly monkeys have been observed by Julia Fischer to significantly reduce the size of their friendship circles, similarly to people. This behaviour has often been given a psychological explanation in humans; the awareness of our own imminent mortality leads us to the (subconsciously) calculated choice to stop making new friends. However, the fact that this behaviour has also been seen in monkeys – who have no known understanding of their own mortality – suggests that a psychological explanation may be insufficient, and that there may be an innate biological drive towards this behaviour.

Alternatively, baby giraffes exhibit a remarkably high rate of suckling from mothers that aren’t their own, relative to other species. First observed by researchers at the Czech University of Life Sciences, this bizarre behaviour has been attributed to a sense of friendship between female giraffes. Although seemingly disadvantageous, this pattern of activity actually provides a variety of benefits for the giraffes. Females form strong social bonds amongst themselves – sort of like a ‘mum’s club’ – establishing a network to help look after each other’s young. In fact, the social bonds between female giraffes seem to grow stronger after giving birth, just as people with more shared life experiences might be more likely to form a friendship. As well as shared nursing duties, the alliances formed by the giraffes also make it easier to protect their young from predators, leading to higher infant survival rates and longer life spans. 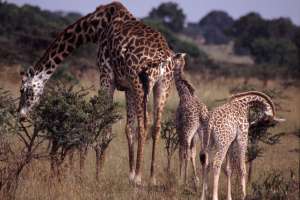 Thinking cross-species, research has shown there to be a reason that dog is man’s best friend. The loyalty and companionship that dogs provide is so powerful that they are often seen as part of the family (the only animals to have integrated so wholly within the social structure of a different species). Adam Miklosi reasons that it is their domestication that has led to a behavioural evolution within dogs, using this idea to explain their heightened sensitivity to the emotional tone of human speech, as well as the push they experience to vocalise their own emotions. Consequently dogs have reached a high degree of social competence, making it much easier to form strong attachments to them. There is something about the human-dog bond that is distinctly emotional, with mutual support being found between the two during times of hardship. Countless stories detail the strength of the attachment that can be formed – one particularly heart-wrenching tale is that of Greyfriars Bobby, a Terrier that spent fourteen years visiting and guarding the grave of his owner, until the day that he passed away too.

Some scientists have speculated that the formation of strong friendships between animals is linked to their way of life. For those living and travelling in stable groups, defensive alliances provide a means of bypassing the stress that comes with being part of a large group (helping in terms of protection, hunting and caring for young). Robin Dunbar went as far as to hypothesise that the bigger an animal’s brain, the more capable it is of forming larger social circles. As it is computationally difficult to take into account how your actions may affect each part of a complex web of friends, the time available and brain size together put a limit on the number of ‘friends’ an animal has. This is Dunbar’s number, and it predicts the size of an animal’s social circle; for chimps this number is 50, whereas a larger brain enables humans to stretch this number to 150 (contrary, perhaps, to the number published on Facebook).

Some may argue that a concept as fundamental as friendship cannot be whittled down to a few similarities in behaviour, or to the release of a particular set of chemicals within the brain. Such a conclusion can come across as incredibly simplistic, neglecting to address the complexity of the topic and jeopardising the magic of something seen to be almost transcendent of our basic biological instincts. However, it is still important to at least acknowledge that such similarities exist. They have the potential to give an insight into the states of consciousness and cognitive processes in other animals. In truth, it is likely that we overestimate the number of traits that are uniquely human – perhaps, in reality, we are not so different from other animals after all.

Dominyka, having recently finished her studies at UCL, is enjoying getting stuck into all things creative. A dancer, illustrator, and writer, her greatest passions are accessibility, interdisciplinary work, and wine.

A revolutionary blood test might detect certain kinds of cancer, but what’s next?