The opening ceremony in Rio last night marked the start of the games of the 31st Olympiad, and the first games to be held in South America. The build up to every Olympics has contained some controversy but Rio has had more than most, with issues such as the banning of Russian athletes due to doping scandals, the Zika virus, security worries enhanced by the kidnapping of a Kiwi athlete and financial concerns, to name just a few. Rio had the difficult task of following on from London’s impressive opening ceremony, which had been spectacular and full of character, but with approximately one tenth of the budget. Yet last night the ceremony was vibrant and sent important messages of peace and unity to the world.

‘IMPORTANT MESSAGES OF PEACE AND UNITY TO THE WORLD’

The ceremony began by telling Brazil’s own story, which included the contributions made by Brazil’s indigenous people, the Portuguese, the slave trade and Japanese immigrants all featuring strongly. This was all done with the message of inclusion which ran throughout the entire ceremony. Even the depictions of the Atlantic slave trade were built-in to show the contributions made by these people to Brazil. While perhaps this narrative was not as charming of that of the British narrative in London (no dancing nurses on NHS beds) it told Brazil’s story in a stunning way taking fully into account the diverse population of the country.

The major theme of inclusion was also echoed by the inclusion of the Refugee Team who will compete under the Olympic flag. This will be the first team of its kind, and during the Parade of Nations the Refugee team were warmly and loudly greeted into the stadium which put this message of inclusion into action. The team consists of ten athletes from across the world who, for a variety of reasons, had to leave their country and become refugees. In light of the recent refugee crisis the importance of this team cannot be understated. As Thomas Baach (IOC president) himself said, ‘It is also a signal to the international community that refugees are our fellow human beings and are an enrichment to society’. The Parade of Nations features athletes from over 200 nations across the world and the inclusion of the refugees in this parade was an important statement. 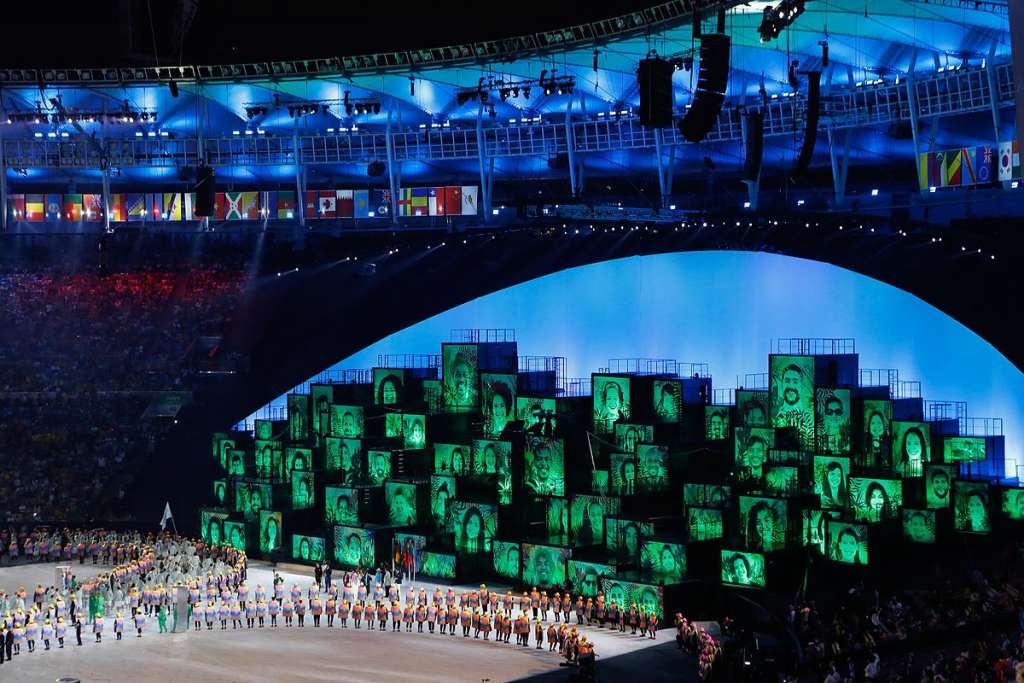 The other major message of the ceremony was that of tackling climate change. This was present in several sections of the ceremony. Dame Judi Dench was part of a reading of the poem ‘A Flor e a Náusea’, followed by a segment which showed the potential damage to various cities, including Rio, caused by the melting of the polar ice caps. A green peace sign was shone into the centre of the stadium and the Olympic rings were formed out of trees making this message incredibly clear. During the parade of nations every athlete was given a seed which will be planted in a new forest, showing commitment to the message that Rio was sending to the world about the need to tackle climate change.

Every Olympic Games has its own character and last night’s ceremony proved that Rio is aiming for a games which sees the traditional Olympic messages of inclusion and unity at the fore. The carnival atmosphere was very much expected from Brazil but these important messages were put forward with equal force and showed the potential for these games to have a great legacy. This is not to say that the problems which have overshadowed the run up to the games have gone away, only the course of the games will show how much of an issue they will prove to be. However, while recent world events have been overwhelmingly negative and concerning, the positivity and character of the Opening Ceremony demonstrates the importance of the Olympic Games in being a powerful, yet peaceful, force.