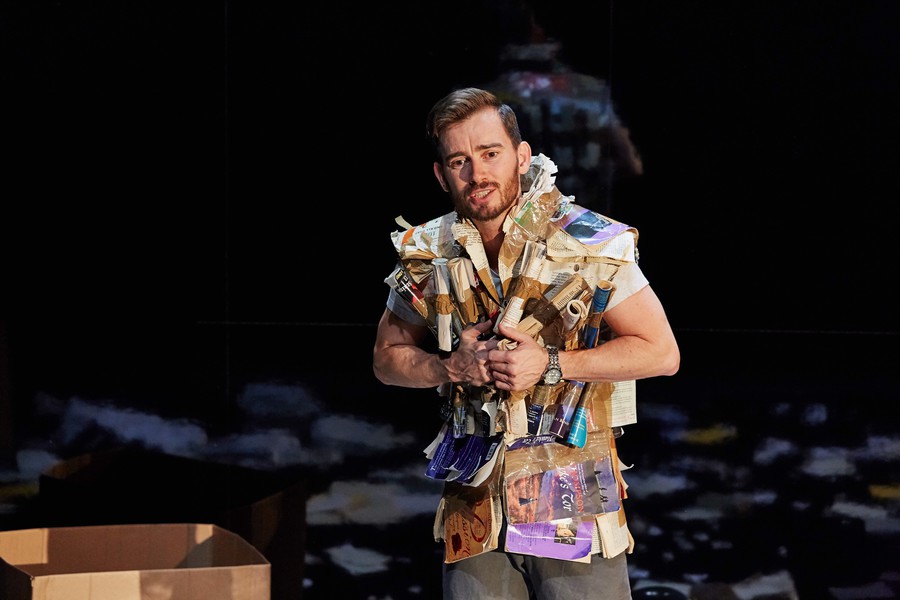 For a play that was written to discuss ‘what is unsayable in the 21st century,’ Fraser Grace’s Always Orange was a frustratingly underwhelming hour from which we came away with little to say. The production was masterclass in mediocrity, but that’s not to suggest there weren’t moments of incredibly poignant prose, and a brave defence of the right to be afraid in the aftermath of terrorist attacks.

The play was hindered by having only one performance of note (Ifan Meredith), but the fault of that seems to lie both with the performers and the script, with no role being developed much beyond the stock characters of this very on-the-nose genre of politically driven theatre: the teacher, frustrated with government cuts; the class of teenagers with gratingly false accents exclaiming ‘Oi, Miss’, before beginning any sentence; the slightly relatable everyman who becomes disenfranchised with the world around him; even an American whose only focus was security. Each character seemed either to have nothing to say, or would soliloquise a wonderfully poetic (but entirely out of context) five minutes extolling the virtues of libraries and the like, before returning to the former.

The opening of the play was shaky, with a tattered and frantic Joe (Meredith) giving an agitated monologue in an almost dystopian London – the aftermath of the continuous terrorist attacks. Despite this, however, he managed to pull it together with some beautifully written, and delivered, dialogue. The story dealt mainly with this character, a man who somehow gets caught in three terrorist attacks organised by ‘the caliphate’, and his resulting trauma and enlightenment about what should be preserved. In the immediate aftermath of the first attack, he escapes by strapping the King James Bible and a Shakespearean tome to his feet to cross the broken glass. A detail on which he fixates, but is deemed unimportant by the American government official.

“The sincerity of the playwright was clear, but sadly his message was not entirely realised”

Surrounding this main timeline was the context of near constant terrorist attacks in the country, an enormously underdeveloped story of a teenage girl becoming a member of the caliphate, and the overarching themes which were only discussed in the various waxings lyrical of Joe. Whilst the play had various points it wished to make, the jumbled mess of scenes that made up its narrative seemed to be nothing more than a framing device for Grace’s essay on literature, libraries, and fear.

The production itself was strong enough to keep the audience from checking watches, with some elements being more than adequate. The explosions of each of the three attacks were handled in such a way that they did prove unsettling, even if the symbolism of books rather than ash falling from the sky was a little heavy-handed, and the black box set opening to reveal a park inside was pretty neat. The knock-off Footloose dancing in the scene changes was a little bizarre though.

For its performance in a theatre that champions both innovation and experimentation, Always Orange was disappointingly lacking in both. The idea of living in fear of the next attack and distrusting our neighbours is not new to an audience that has seen the recent attacks in France and Germany. The message of ‘Save the Arts’, which has been trod and retrod in recent years, but never so effectively as in Children of Men, was far from inventive. What was most interesting was the oddly reassuring idea that it is okay to be afraid. Joe’s opening monologue discusses hope being traded for fear. In a country where a stiff upper lip and ‘mend and make do’ is something of a mantra, this honesty was somewhat a revelation.

A jumble of scenes, frankly forgettable characters, and a clunky piece with a redundant message, Grace’s new work is far from innovative and unlikely to be remembered much beyond this festival. It told us nothing we don’t already know, nor did it give anything to ponder. Its saving grace came in the casting of Ifan Meredith and his deft touch during moments of incredible poeticism. The sincerity of the playwright was clear, but sadly his message was not entirely realised. If his goal was indeed to explore what it was to be human in a world always on edge, he just missed the mark. Although, just because its messages are nothing new, that doesn’t make them any less important.