Fall of the Kingdom, Rise of the Foot Soldier – Making Mischief 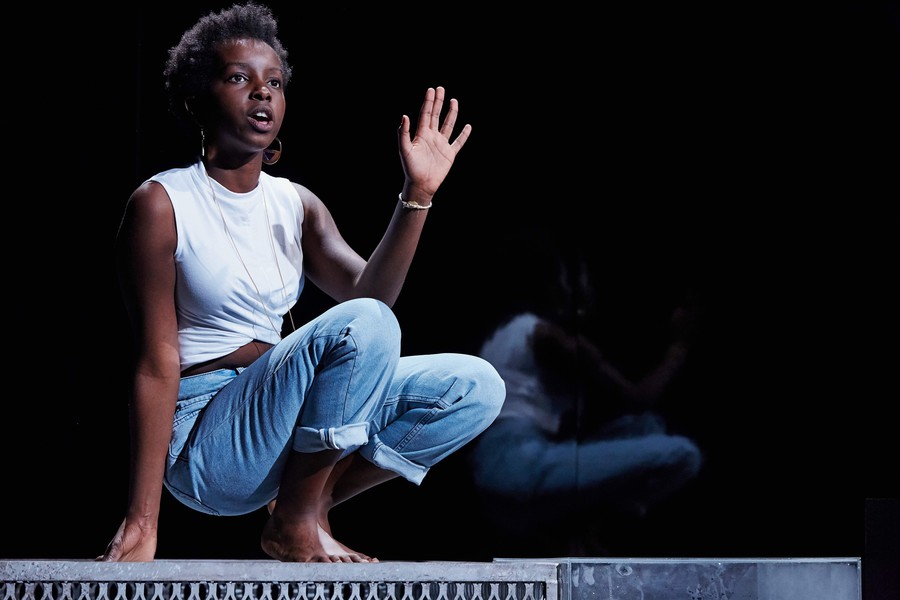 Fall of the Kingdom, Rise of the Foot Soldier, is a genuinely angry, eloquent, and important play, unfortunately hampered by the intensely pretentious production that housed this newly written piece by Somalia Seaton.

The story of the hour details how Aisha (Donna Banya), a black schoolgirl, returns to college having been suspended for writing a ‘divisive’ blog and is counselled by thirty-something, white teacher, Hawkins (Laura Howard), before the further complication of her being accused of killing a white police officer embroils them both in an uncomfortable scenario. This is not important. The narrative seems to exist only as an excuse for the discussions raised throughout, with each turning point in the play laboured towards in anticipation of a new speech or trite therapy scene. This does not, however, negate the power and fluency of what is said. Whether it is Aisha’s emotional rendering of how she does not feel this country is built for her, or Shabz (Syreeta Kumar) elucidating the issues of the liberal left’s ignorance of its own racism, each time Seaton’s voice comes through, you listen.

There are multiple chorus scenes throughout the piece, each one consisting of three voices professing their attitudes toward the discussion of race in England – a seemingly effective method through which to add context beyond the main characters’ tale, but one that does not always prove so. What was most frustrating during these scenes was the appearance of the chorus, sporting cardboard boxes with felt tip faces on their heads. A stylised choice that tried to be inventive but only elicited a sigh each time they appeared in the conceitedly unoriginal headgear.

The set, also, was a stale retreading of once innovative ideas, consisting as it did of various cubes built from plastic or metal, some containing water which would show ripples at times of great emotion. Each scene change was conducted under a blinding white light accompanied by a long electronic buzz followed by a clunk, perhaps reminiscent of a lock in a high-security prison, which attempted to make the audience feel uncomfortable, as was the theme of the play.

The show suffered from its lead actress falling flat one too many times during the scenes of great emotion, but perhaps this was simply the task of performing two vastly different plays being too great, and further, the lack of a standout performance from any of the ensemble didn’t help to mask the missteps of the director.

Seaton’s piece asks a sincere and very much unaddressed question: what type of racism is worse? Bold in its assertion that racism contains a grey area, her writing asks uncomfortable questions of its audience in the best possible way. Is it better to be outwardly racist, but honest, or to attempt to mask one’s own racism under the veil of a liberal outlook as you clutch your bag when a black man walks past? One character gives her answer, but the question is left for the audience.

All told, Fall of the Kingdom, Rise of the Foot Soldier, is a play that deserves discussion, and to walk out of the theatre without doing so is cowardice. Its only real issue is the clichéd and frankly lazy manner in which it discusses such important issues – see the counselling scenes. It is a play that makes you uncomfortable, hits a little too close to home a little too often, and leaves you with a lot to think about. It is a play that says things in a way other people wish they could. It’s simply a shame that its debut wasn’t what it deserved.