Too little or too much?

The answer to this common question asked of the amount of clothing women should wear, is of course, a resounding: whatever the hell she wants.

Today I had the pleasure of going to the Wear What You Want Beach Party protest situated outside of the French Embassy in Knightsbridge, London. Along with editor-in-chief Clare Clarke and one of our writers Kath Walking (check out her news coverage of the event coming soon), we went along to show solidarity in particular with Muslim women who are suffering from both Islamophobia and sexism combined. Islamophobia (as I have previously written about) shows no signs of declining, and women especially are facing the brunt of it. The recent burkini ban put into place by France showcases the, frankly, disgusting attitudes that the ‘civilised West’ holds towards Muslim women.

The idea that the Western world is a safer place for Muslim women to be than in Eastern countries is a ridiculous notion, made even more so by the French government’s behaviour. The burkini has been said to hold radical Islamist connotations and not conform to France’s secular ideals. Yet the misogynistic act of telling women what to wear does not seem to confront either the issue of radicalisation or of aiming for a more secular country. Does being armed and forcing a woman on a beach, with her child, to take off her garments symbolise all that is great about France and its liberty? Does stripping an innocent woman of her right to express her identity through her choice of clothing help with the ‘issue’ of Muslims having something against Western ways? Because if that’s the way of the forward-thinking, civilised, safe society of this part of the world, then count me out.

I wish I could base this argument more on the issue of sexism than Islamophobia. I wish I could say that it’s not about the fact that she is Muslim but it’s about women, everywhere, having a right to wear whatever they want, and this not to be decided by the patriarchal order that still seems to not get the message. I was tempted to write a paragraph arguing that even if the woman at the beach wasn’t Muslim the problem is a patriarchal government interfering in what the opposite sex are wearing, as if this has any bearing on anything. But I can’t write that. Because the fact of the matter is, it is because she is a Muslim woman. No other women on the beach that day were harassed, and some nuns were even photographed on the beach completely undisturbed by French authorities. To add to the already endless heap of stupidity that is the burkini ban, she wasn’t even wearing a burkini, just a tunic. But we wouldn’t want someone walking past to think it was a burkini – god forbid. 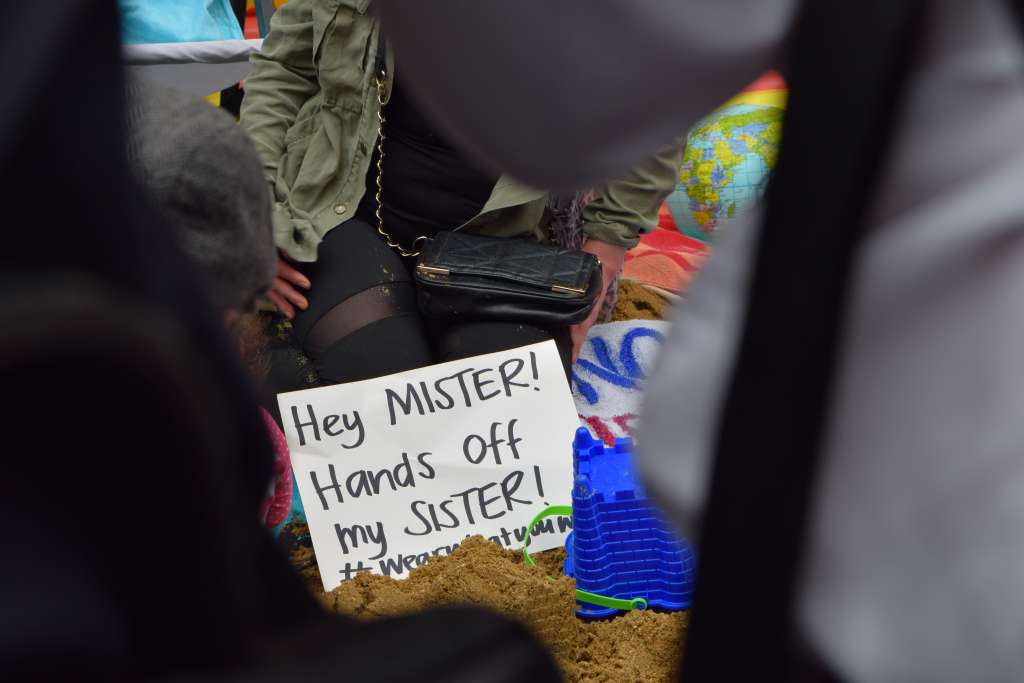 ‘The burkini is a form of oppression’: what a load of bullshit. Women are just as capable (in some cases more, I’m not going to lie to you) of making their own decisions – wait, no…did I just say that? Is that too controversial? That the female sex can actually choose how to express their beliefs through their external wear without a man telling them to do so? It’s shocking really, the things young females come out with today. #feminazi

This is not an issue of general feminism. This is not just about women being oppressed by men. This is, in particular, the issue of Muslim women being specifically targeted for their religious beliefs, and under the guise of secularism, being punished and humiliated for them. France’s history with Muslims has never been great, let’s face it. But it’s not enough to just acknowledge that this is unjust. We must speak out. We must stand in solidarity with Muslim women to show that we will support them and that we are actively against the actions of the French government.

Aina Khan, a protestor at the event, told us her reasons for attending: “Muslim women are facing a double bind: we’ve got an issue of misogyny, and now we have this Islamophobia as well and really I’m just here to kind of just show my anger and my solidarity with my French sisters.”

I asked Aina what she thought of France now that they had shown their intolerance for the Muslim faith pretty clearly:

“It makes me reluctant to go and visit France if anything. I mean you’re not going to see me going on a beach in France anytime soon because the humiliation – I mean everyone’s seen the photographs of that woman who was forced to strip at gunpoint, the humiliation she was subjected to in front of her own kids as well – I don’t think I would be able to put myself through that. And I think a lot of Muslim women are probably concerned about what the reaction might be as well. What if we refuse to take it off? What will happen to us? Are we going to get thrown into a jail cell just for not stripping? I mean that really says it all.”

Is this really what France wants to achieve? For Muslim women to fear them? With all the talk of Middle Eastern countries being appalling for women’s rights, and us acting all high and mighty over here on this side of the world, the hypocrisy is astounding. 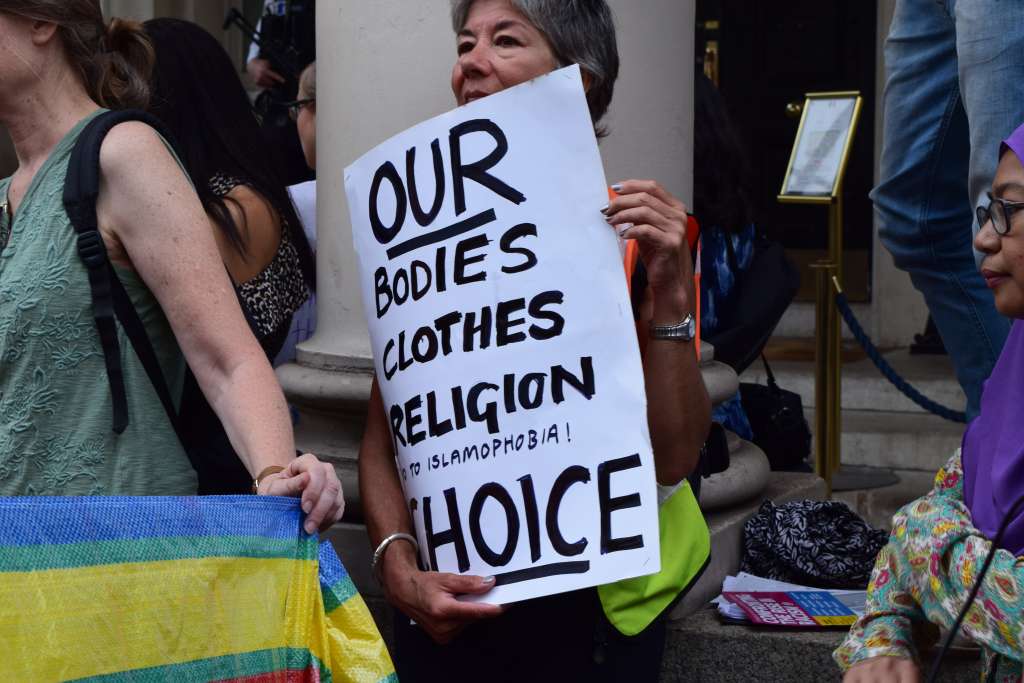 “…we’re still battling misogyny in the West to a huge degree, and these policies are a massive part of that.”

In fact, another protestor by the name of Erin O’Halloran tackled this exact issue when I asked her why she was attending the protest:

“I’m currently living in London, but I lived in the Middle East for a long time and I take issue with the perception that Western countries are somehow safer or better, or more free places for women to live than Middle Eastern countries.

I have certainly not been subject to not nearly as much catcalling, harassment, threats of violence, threats of sexual violence in five years in Beirut compared to what I have endured in London, Paris, Canada, travelling in Spain. Whatever, you name it. And I don’t think there’s anything more safe or more free about living in this society on that basis. So I really take issue with the basic argument that somehow this is a country of women’s rights, or France is a country of women’s rights, because what we’re seeing with these policies is the exact opposite of that. We’re seeing women’s bodies becoming an appropriate place for male police officers and for a state to try and set the boundaries of a culture war. I find that really problematic because my individual experience has been so different and I really want to highlight that we’re still battling misogyny in the West to a huge degree, and these policies are a massive part of that.”

We tend to discuss in much detail the issue of radical Islam spreading to European countries. Yet we do not discuss nearly as often, or with nearly as much vigour, the problem of Western superiority, racism, discrimination and misogyny towards Muslims and other potentially ‘dangerous’ social groups.

I asked both of the event organizers, Fariah Syed and Esmat Jeraj what they hoped to achieve through this protest and their thoughts on the future of the struggle for Muslim women’s rights. Here is what they had to say, respectively:

“It’s to raise awareness. It’s to show Muslim women in France, and across the world, that we stand with them. And against Islamophobia. And also to try to encourage people to be more tolerant and more understanding. If you know someone or see someone that’s Muslim, smile at them and try to understand why they do what they do.”

“We are hoping that this will agitate French authorities to reconsider the ban. I am, however, aware that public sentiment in France seems to be incredibly supportive of this and so we do need to be challenging this on the ground of civil liberties. So if you go back to the place of the woman on the beach in Nice, she was not in fact wearing a burkini she was simply wearing a long sleeved tunic top that she was asked to remove. So this suggests that the ban of the burkini is not actually being implemented, it seems to be a ban for any form of dress associated with Muslim women. Now, if a long sleeved tunic top is an article of clothing that women of all communities can wear when they go grocery shopping, when they go to work, then again this is once again becoming an inherently misogynistic piece of legislation with men – or the State in this case – dictating what women should and shouldn’t wear, and therefore should and shouldn’t do.”

“…we’re tired of people talking for us”

There are a lot of injustices going on in the world and sometimes, in the face of so many, instead of doing what we can we become paralyzed with choice and simply do nothing. I urge you to not take this route. Whether it be supporting your female Muslim friends, or attending protests, or raising awareness by simply sharing and liking articles (not a hint, I promise), do what you can. If liberty and equality really are values that you hold dear then do not let them be tainted by the actions of an ignorant group of white men in an office somewhere in France. Show them that they are not representative of you. Show them that making women fear being true to their faith is not an ideal that you want associated with France. If you are against Islamophobia and if you are against men consistently persevering with the perverse notion that they have any right to tell any woman what to wear, then I implore you to speak out.

“I just think that’s another thing as well, we’re tired of people talking for us and telling us that “yeah this is what you think, this is what you don’t think”, no thank you, I’ll speak for myself.” – Aina Khan. 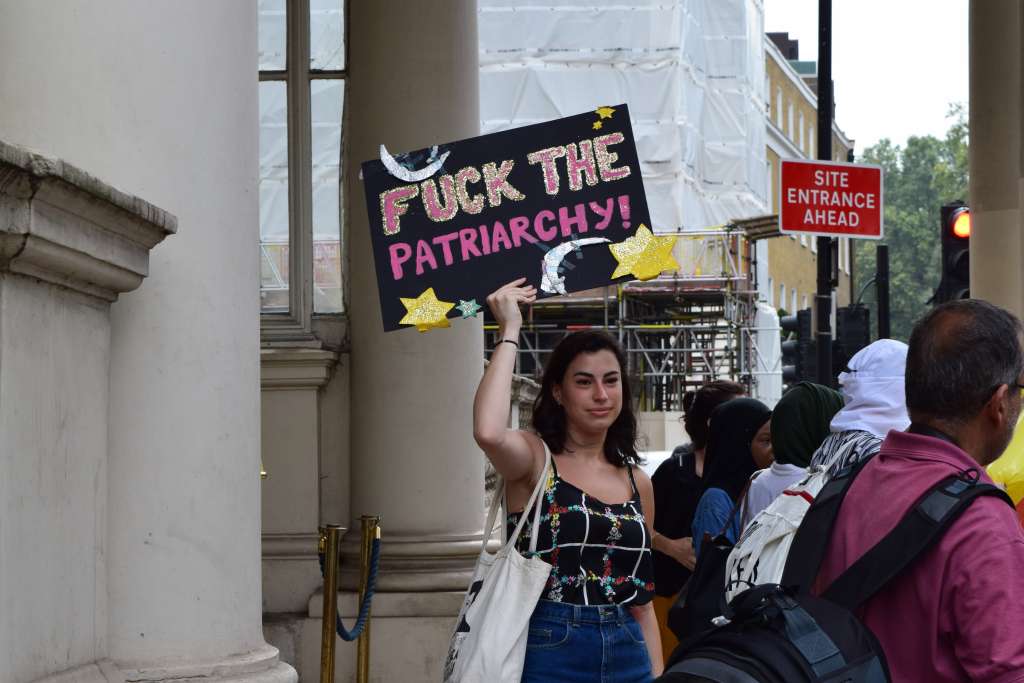 Going beyond the “Januhairy” movement: Wave your arms in the air, if you’ve got underarm hair!