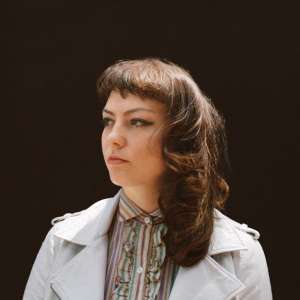 Angel tenderly sails through the opening synth-infused track Intern with her soft, subdued vocals, seemingly contrasting the mundane of the everyday workplace with the recurring disappointment she finds in love. “Still got to wake up and be someone” she sings, giving an impression of the tedium she finds in it all, “Pick up the phone but I swear it’s the last time”, she’s weary of this repetitive cycle in the same way as perhaps an intern at your typical office job would be.

Many of the despairing love themes found here carry through to the rest of MY WOMAN, her third studio album, with much of its duration centring on the dejection she’s experienced in her life. Angel is at her most desperate and morose here, but also resigned to the inevitable, with each experience just being another component in the routine.

The second track Never Be Mine is certainly no exception to this, as its title hints, however the pessimist in her begrudgingly relents for the following song, Shut Up Kiss Me. A welcome change of pace, the electric guitars propel her vocals into a far more confident and poised position. She sounds driven here, her voice strongly adopts a far more firm, assertive quality with lyrics about the defiance of her crumbling relationship. She’s not ready to let go, and the instrumentation on the track reflects this more stubborn attitude, commanding attention with its brash, hammering kick-drums, and its rowdy guitars.

“Angel is at her most desperate and morose here, but also resigned to the inevitable”

Success always seems far off however, as demonstrated by the song Give It Up, detailing the experience of being subjected to the proximity of her ex-boyfriend and the feelings that go along with such. Whilst the song remains fairly up-tempo, the high from Shut Up Kiss Me comes crashing down and defencelessly she admits to these feelings and thoughts in a sort of open letter.

The record is certainly front-heavy with its punchier, more succinct tracks whereas the second half becomes increasingly more mellow and drawn out as Angel ramps up the track lengths with the 7+ minute Sister and Woman. The stronger of the two, Sister, switches up the usual subject matter of the record as she sings of the sister she never had, being an adopted child, imagining how things might have been different. It’s quite a slow-burner, “all my life I thought I’d change”; she refrains after visualising this alternate life, and continues until the song culminates in a mass of towering guitar and reverberating vocals, one of the high points of the second half.

In terms of instrumentation, Angel is more adventurous than in comparison with the likes of her previous studio album Burn Your Fire For No Witness. She strays from the simple acoustic singer-songwriter formula of the past, for example with the inclusion of keyboards and electric guitars, and a more perceptible hop between styles and tones between tracks. Whilst this does mark a refreshing change in her sound, she ultimately struggles to fully execute this more memorable approach to songwriting across the entire breadth of the album, leaving forgettable tracks such as Those Were The Days to flesh out the remainder. As a competent vocalist however, Angel is able to compliment these gentler, slow-moving instrumentals by being softer and more deliberate in tone, but can easily adapt to the more energetic tracks by offering a bolder approach in her delivery – Shut Up Kiss Me being the perfect example.

It all rounds off with Pops, comprised purely of vocals and piano and their echoes that fill the spaces. She sings in a hushed manner and finishes off like she began, nothing has changed, nothing but her tone. Angel began MY WOMAN sounding weary of the cycle she’s trapped in, we found her at the beginning of the routine, but here on Pops we catch her at her most vulnerable, the other extreme. “All those people they don’t see me”, “Couldn’t love ‘em if I tried to”, perhaps she’s right, or perhaps she’ll wake up and loop back into the same old tiresome routine.