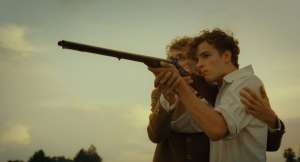 Following the twisted, taboo, and very true tale of a young Ladislav (one of the most influential of Czech writers) comes the black comedy Peacock. Ladislav (Julius Feldmeier) is a passionate rapscallion, the son of a landlord who is forced into hiding in a monastery when war breaks out. It is there where he discovers his hidden desires and upon his return he befriends a sensitive poet, Jan. From here, Ladislav’s jealousy takes control and the short continues on a darker edge. Suddenly violence and gore are introduced in a perversely comic way, which entirely makes sense with the style of the film. The artistry of the cinematography paints a beautiful homage to the 19th century picturesque Bohemia. The landscapes, all so distinctive yet fluid, flow into each other beautifully to create truly stunning scenes, tinted with the warmth and romance of nostalgia. Director Ondrej Hudecek infuses this piece with a gorgeously tactile array of colours and textures which really brings this short to life. 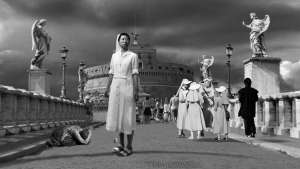 Self-described as ‘a film in imitation of a worm-hole’, The Sealed Bridge was a bizarre hybrid between ‘Google Maps’ and a photograph. Filmmaker Jiang Hongqing reflects on a Chinese man imprisoned in Castel Sant’Angelo in Rome three hundred years ago, drawing inspiration from Goethe’s poem ‘The Chinese in Rome’. It took Hongqing a little over two years to create, as he is a self-described ‘one-stop-shop’. Drawing influence from the isolation and photography of ‘Google Maps’, he came up with this idea for a short. The result was lovely poetic prose voiced over a pseudo-animated staging of sorts, almost as if you had stepped into a photograph and were walking around when everything else was frozen. Inexplicably, there were beetles scuttling around as well, until it ended on a rather long shot of what I can only assume was a bus with opera music blaring in the background. In all, it was very disconcerting to watch. What was a good idea in theory just didn’t seem to translate well in practice.

Between the Sea and the Bark is a tragic short set in Quebec during the late ‘80s. Following the divorce of her parents, a young girl (Claire Lavergne) is dropped off at her father’s (Kevin Parent) place. As it gets later and her father fails to return, Claire decides to follow a rabbit trail to search for him. Aided by the striking landscapes, filmmaker Mathieu Cyr creates a visual masterpiece. Wide shots of the barren, snowy rural scene create a gorgeous backdrop for his story. The story itself is gripping in its own right, shown through flashbacks which come at increasingly more frequent moments as the storyline builds and the background relationships are explained between estranged mother and father. Yet, with the hallmark of a good storyteller, Cyr leaves it up to the viewer to piece the information together. Altogether, it was a fantastic piece that was everything that a short should be. 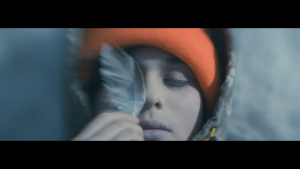 Running Eagle follows the story of a young American Indian girl on the run from a North Dakota oil patch, determined to get back to her home in Blackfeet country, Montana. Set in a bleak and desolate landscape, the tone is set before the story even begins. This short pulls no punches; Konrad Thọ Fiedler ensures that the viewer understands just how tough this girl’s life has been. Even after escaping from her tormentor, there is little hope for her in the unforgiving snowy setting. Scenes of hunting buffalo are interposed with images of her flight with more Native American motifs spread throughout: tribal drums beating out the soundtrack, and her eagle feather that she carries around for luck. Though there were moments where this short showed real promise, it seemed to be more of an audition for a feature film than a short in its own right. 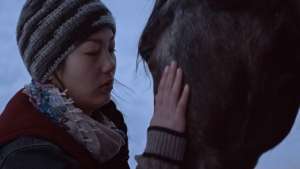 Seide is a short with a very minimalist approach to narrative and dialogue, which serves to really emphasise titular character Seide’s (Razha Alieva) feelings of isolation. Afraid of change, Seide seems to be unable to escape an arranged marriage and what comes with it, the loss of what she loves most: her horse. Elnura Osmonalieva creates a realistic short to marvel at, her crisp visuals are offset by very precise sound effects that truly create the scene. Seide provides the viewer with a vignette of the harsh conditions of life that only serve to exacerbate the isolation felt by the primary protagonist. If you are looking for a full story, this is not it. Instead, the point to this piece is the beautiful photography, which serves to emphasise the seclusion and remoteness of the location.