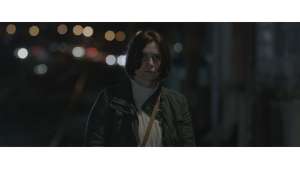 Arranged marriages are certainly a contentious issue, and this short from Kosovo places the viewer in an uncompromising situation, forced to witness the tragic life of Hava (an almost silent Xhejlane Tërbunja). As her brothers cast her away from the home where she was born, Hava is unmarried and forced to control the reality of leaving her life and secret girlfriend behind. Raça’s short is bleak, based on true events, and successfully displays archaic traditions with the separation of women, left to look after children and cooking duty, from the men, who control the destinies of their female relatives. It is a sad portrayal of a dismal life that ends on a sombre note, but raises the question: surely Hava’s life is better off by getting “as far as [she] can”? A snapshot that leaves a bitter taste in the mouth, it is upsetting for sure, but hopefully offers the smallest glimmer of hope to save you from pure devastation. 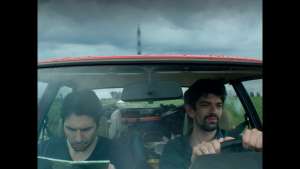 When Tom returns out of the blue to the funeral of David’s wife, the two characters are forced to control their personal history in Gaëtan D’Agostino’s slow-burning relationship tale. Certain set pieces offer some delectable shots: Tom’s face is blurred by water in a fishtank as the in-focus food floats gracefully; the blue illuminated fishtank highlights the protagonist’s feeling of defeat; and a raindrop trickling from a crack in a windscreen is as striking as it is depressing. This imagery is projected beautifully by the director, with the fractious chemistry between the leads fully believable. This short deals with loss with aplomb and featuring some occasionally funny dialogue, it manages to evoke sympathy for each troubled character. Well worth a watch. 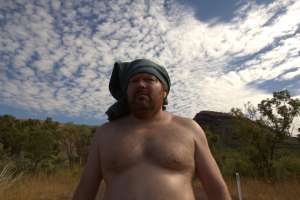 Australian films are likely to be a bit of fun, aren’t they? Damian Walshe-Howling’s stupid yet entertaining short is slightly hit-and-miss, but has an ending that really won the audience over. Irish buffoon Moylan (Stephen Hunter) decides to abandon his Parisian girlfriend in the Australian outback in order to follow a mysterious shaman, who he believes is God. Walshe-Howling’s cinematography captures the beautiful landscape with sweeping shots, throwing in some dodgy CGI to laughably show Moylan’s delusion and a party atmosphere is created out of fucking nowhere when the Irishman accrues some fellow ‘disciples’. It’s wacky, it’s creative and it’s concise. You’re thrown into a cloud of unknowing, but don’t think about it too much and just go with it; you’ll enjoy it that much more. 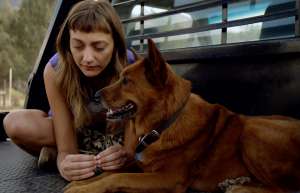 Hux somehow didn’t make it into contention for the Best Shorts Award at Raindance this year, and I’m not entirely sure how. Strong as the category was, this deserved at least a nod. In 12 minutes you are thrown into the world of Hux, an autistic woman, as both participant and observer. Initially, it seems as though they hadn’t quite got the sound test right as you’re assaulted by an overly loud soundscape – in reality, it’s an attempt to let us understand a world we do not know. The film is horribly disorienting, leaving the audience feeling the fear Hux encounters in routine activities like shopping, or putting off calling her mum. Eased only by her dog and memories of her grandfather, she struggles with herself and the world around her, constantly assaulted by the amplified nature of each sound she hears. She lives frustrated with herself and we feel deeply for her struggle. Having experienced for the briefest moment what she does daily, Hux cultivates a touching empathy and newfound respect for its subject. 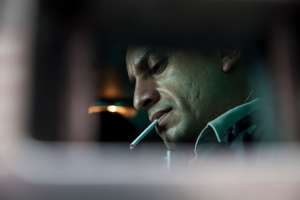 The opening shot of Green is just fantastic. The camera sits on the bonnet of the Mexican equivalent of a Securicor van, taking in all the sights and sounds of their daily route through the streets of a Mexican city, whilst narrated by the conversation occurring in the van; each participant telling stories of ‘the one that got away’. Cut into the sweaty box, and the three workers continue their tales, intersected by the stops on their round, and quick, loud images of the routine. Abandoned by his watchman for a piss, the driver faces a decision to run with the money, and you can probably guess this is the crux of the story. The cinematography is incredibly adept, and the actors deliver beautifully understated performances. Some of the discordantly offputting sounds, paired with equally uncomfortable visuals, create an unexpected, yet fitting texture to this short, but overall, Green is a curious piece in which wonderfully little happens. 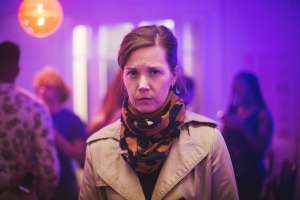 Perhaps the most selfish film I’ve seen, Friday Night is a baffling visit to the Paris shootings of nearly a year ago. The film follows Claire, an American mother in Paris, as she attempts to find her daughter, another American who is studying in the city. As the party Claire is enjoying gets interrupted by the news of the attacks, she calls her daughter to check her safety. Receiving only her voicemail, she gets in contact with her possibly ex-husband, but father to their child, and asks him to try and find her on Facebook. She then travels from house to house, party to party, ’til she discovers that her daughter is in the club where hostages are currently held. Cue the ending you can probably guess this horrendously Americanised tale tells. The performances are weak and unconvincing, the script is utterly flaccid, and the director attempts a blockbuster effect, which is neither fitting nor achieved. The Paris shootings deserve better than Friday Night.

One thought on “International Shorts 3”