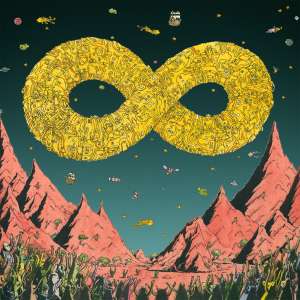 “GIMME THAT CANVAS LET ME PAINT SOME SHIT!”

yells Jon Mess to kick off Dance Gavin Dance’s seventh – yes, SEVENTH – studio album in ten years. I always struggle to describe DGD to virgin ears, but it’s safe to say that Jon has absolutely nailed it in one short line. Instances of post-hardcore, groove, math-rock and anything else Will Swan et al want to throw into the pot create an already colourful canvas for Jon Mess to supplement with his nonsensical ramblings. Even that is a bit generalised, but it’s genuinely the best I can do. It’s the first time in the band’s history that they have released 3 albums in a row with the same singer, and only 18 months since the release of Instant Gratification. Absolute madness. With the exception of Happiness, their impressive output has never disappointed (don’t think that I dislike the Kurt Travis era either, I’m a big fan, but there wasn’t as much Mess), and latest offering Mothership proves once again why DGD are the peculiar, unrivalled bunch that I adore. This will essentially be a toss-up between a review of the latest album, and an open letter about why DGD are just so brilliant.

The collection of songs here is nothing new for the band, but why change when you have one-man-riff-festival Will Swan and the ever versatile drum aficionado Matt Mingus? Nobody else has really come close to sounding like DGD; even their various side projects over the years (Sianvar, A Lot Like Birds, Strawberry Girls, Secret Band) don’t quite captivate that OG sound that made its irrefutable mark with Jonny Craig on the mic in ’06. Again, we are treated to pop sensibilities, harsh grindcore-esque noises, and some almost effortless noodling. I’ve never really known a guitarist to have some clean-tone shredding overlapping in both the background and foreground of the music, but Swan achieves it remarkably, and is unfortunately such an underrated guitarist. That opening riff of Chocolate Jackalope: hello, ladies. Also, the guitars in Exposed sound like a children’s carousel accompanied with fart noises. How has he managed that? Frighteningly cool.

If I could spend a day walking around someone’s mind, it would be that of Jon Mess. Madman or genius? Who can say? Who cares? Rather than trying to explain any of his wacky lyrics at all, here’s a list of Mothership‘s best Messisms to add to his decorated career:

“half wrapped in a leopard print sex swing”

“I wanna be the man with the bacon”

“kangaroo cracks its dick in half”

“your eye cream sprayed all over Little Bear”

I could go on, but you get the picture. Keep it up, Jon.

“someday it may be heralded as highly as the Downtown Battle Mountain albums, and that’s saying an awful lot”

I even remember when I first listened to ‘Strawberry Swisher pt. III’ really not knowing whether to like Tilian Pearson’s first song with the band or not. Luckily, it grew on me a lot, as did Acceptance Speech, and now three albums into his stint with DGD, Tilian’s confidence has grown exponentially, and I’m a big fan. His vocal performance on Inspire the Liars is possibly his best so far, and Exposed gives him the centre stage to really shine. His high-pitched crooning juxtaposes Jon Mess’s maniacal wails perfectly; ultimately the hardest ingredient for DGD to juggle with their ever-changing vocalists. Every fan has their favourite singer: Jonny Craig, Kurt Travis, or Tilian, and luckily all three are great in their own right. Their 10-year anniversary shows in the UK are going to be extremely special, seeing all eras of DGD on display. They are almost like a rap collective in the world of post-hardcore; another reason why they are in a league of their own.

When one minute you’re hearing Tilian talking all things sex and relationships, and the next you’re listening to… something from Jon Mess, you know you’re in trademark DGD territory. Jon’s vocals have never been perfectly audible, but his voice is still as strong as ever, and looking up the lyrics is always a chucklesome activity. The ridiculously named Petting Zoo Justice is probably the heaviest track the band has ever produced, made even more silly with Jon detailing some sort of Royal Rumble battle between various animals: “white beaver, fight golden retriever, one has meat cleaver”, for example. Unbelievable. This song certainly has more of a Secret Band-style to it, whereas the more groove-laden instrumentals and disco beats of tracks such as Young Robot (nice to see they still haven’t completely killed off the song series, despite ‘Death of the Robot with Human Hair’ on Acceptance Speech) and Flossie Dickey Bounce take us back to the funkier pop styles of tracks such as ‘Privilously Poncheezied’ or ‘Carl Barker’. There’s so much on show here.

I always anticipate a vocal cameo from Will Swan himself with every release too, and when it comes, unexpectedly on the first listen, it’s always a gem. His perfectly rapped verse on ‘Spooks’ (Downtown Battle Mountain II), his tongue-in-cheek features at the end of Acceptance Speech‘s title track: “WOKE UP IN A NEW BUGATTI…” and on Eagle vs. Crows: “If you’re not turnin’ up, then your whole life’s a disgrace”. Now we have a short-but-sweet, mockingly autotuned section on Chocolate Jackalope. Sublime. With the release of the single Betrayed By The Game, complete with bizarre music video, I knew Mothership was going to be fantastic. It may be the catchiest song of the year and it is utterly infectious, much like the rest of the tracks.

Rise Records, at one time in my teenage years, had most of my favourite bands in their roster. Despite numerous line-up changes, Dance Gavin Dance are still kicking and still the best, making me fall in love again and again with each release. The only reason why this isn’t a 5 star review is because of time; someday it may be heralded as highly as the Downtown Battle Mountain albums, and that’s saying an awful lot. Long live Dance Gavin Dance.