Keats meets Nietzsche; how Bob Dabbles with the Romantics through three takes of ‘Visions’

The Cutting Edge is a fascinating collection of alternate takes on Dylan classics between 1965 and 1966, a time when Dylan’s surreal punk folk was setting the music world ablaze. Released towards the end of last year, the collection contains a mesmerizing (we are told, fifth) take on his hypnotic rocked-up philosophical ode, ‘Visions of Johanna’. Whilst picked apart the world over, analyses of the song never touch upon the burning question of creativity; and more disquietingly, the overt (and at times direct) allusions to the great 19th century free spirit, Nietzsche.

Don’t glaze over just yet, there is some groundwork to do, but soon I’ll have you all raving that Dylan is Nietzschean, and that Keats said it all better.

It’d be best now to clear any difficulties in the task; Foucault certainly wasn’t the first to note that, whereas art and music pertain to the particular, language only deals with the general. As such, mere words will never manage to adequately convey a meaningful description of music. Indeed, Martin Mull was on the money when he noted that talking about music was like “dancing about architecture”.

Yet the sentiment behind the ineffability of artistic drives is nothing new. Nietzsche, the philosophical wrecking ball behind The Birth of Tragedy from the Spirit of Music (the intellectual home of every pretentious art critic), was well aware of this sticking point, and it is not without a heavy dose of irony that he constructed his grand rational presentation of the irrational forces in his very broad definition of art

These forces, Nietzsche holds, boil down to the primordial de-individualising sweet madness of the Dionysian, and the ordered, practiced and mechanical force of the Apollonian. It is from a healthy mix of the two that art finds its highest form.

“Dylan is Nietzschean, … Keats said it all better”

So why then is Visions of Johanna in this way Nietzschean?

There are two angles of attack, mapping the song onto the philosophy, and highlighting the auspicious collection of cryptic references here taken to point to Saxony’s prodigal son.

If you are still reading, I trust that you are familiar with the song (if not, and you simply have a remarkable attention span, go away and listen, it is a Dylan classic with good reason). You will know then the rambling journey through surreal Americana, as seen whilst flitting between a hazy room in the Chelsea Hotel and the manic, chaotic streets. You will know the recurring image of a distant light and energy flashing in and out of being. Importantly, you will know the ciphered love story of the ever-present ordered Louise, and the quasi-existent dream-like Johanna.

First to the “light [that] flickers in the opposite loft”, the recurring image is an exploration into the question of the artists’ muse. Here we’d profit from a quick diversion into the poetry of the romantics. High on Nietzsche’s mind when constructing an outline for the re-birth of tragedy were Wagnerian opera and Goethe’s visceral Sturm und Drang (Storm and Drive) literary mindedness. Loosely, this can be clumped under ‘German Romanticism’. The programme fell into the broader catch-all movement of Romanticism, wherein there was a focus on authentic aesthetic experience 1. Among the poets caught up in this cultural ideology was the great John Keats (I say great to give credence to his charmingly romantic hope of being remembered ‘among the greats’). His romanticist touch was pronounced no more so than in his Odes, and in the Odes, no more so than in Ode to a Nightingale (haven’t read it? The internet should deliver recordings by Stephen Fry and Benedict Cumberbatch for your ears to enjoy). In another reading that seems remarkably absent from discussions that usually never stray far afield from rhyme and meter, Ode to a Nightingale can be interpreted as a neat exploration into the drive of creativity. There are pains “where palsy shakes a few sad last grey hairs, and youth grows pale, and spectre thin, and dies”, there is drunken madness if one were to be “charioted by Bacchus and his pards”, and natural beauty amongst “mid May’s eldest child, the coming musk-rose”. Yet none of these suffice to take the writer to the object of her fascination. The distant, intangible nightingale, the poets drive to… poetry. 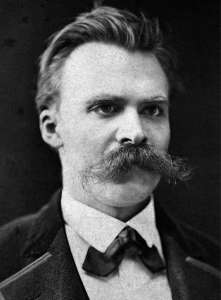 What on earth does this have to do with Dylan 2? Well, my first argument is that the “ghost of electricity” that haunts the listener throughout are subsidiary allusions to the illusory Johanna, who, in this instance, serves as Dylan’s Nightingale. Where Keats laments that “the dull brain perplexes and retards”, Dylan has the “night-watchman 3 click his flashlight [!]Ask himself if it’s him or them that’s insane”. Any tenuousness in the link can be dropped if we leap back to the Cutting Edge edition, in which one of the closing lines of the released version; “he writes everything’s been returned which was old 4”, is substituted for “[examining] the Nightingale’s code”.

How does this link to the “man with the moustache”? This muse-like figure of madness was of great import, for him, the unquantifiable irrational and intangible force of the Dionysian provides the moment of coition for artistic action. In Dylan’s account of the “lovers so entwined”, the Dionysian corresponds to Johanna, the flitting dream-like need for any artistic progress to be made. Furthermore, the Cutting Edge version of the song is truly Johanna’s, the discordant guitars, increased tempo and strangely timed line deliveries all point to a gloriously chaotic sweet madness.

In contrast, Louise who is “alright, she’s just near”, is the far more tangible mechanical Apollonian drive in artwork. It is Louise who “makes it all too concise and too clear”, it is Louise who “sits here stranded”, trying to work, but falling down as “Johanna’s not here”. Louise too has her version of the song. In a stripped back performance at the Albert Hall, Dylan delivers Visions with four simple progressions on an acoustic guitar, the backing band is absent, and each verse takes one minute and thirty seconds, being interrupted only by a ten second harmonica solo.

The version that was eventually to be released in Blonde on Blonde, was an amalgam of the two. Johanna’s madness was met by Louise’s stability. The conscious met the unconscious as Dylan’s “conscience explodes 5”, and tragedy therein found expression in the 20th century.

What remains is to throw light on remaining hints that “little boy lost” wasn’t, as is sometimes suggested, some journalist or some rival, but was instead the great liberator of thought. Surely anyone can do “small talk at the wall”, however, as he “brags of his misery, he likes to live dangerously”, we find a perpetrator of the pessimism of strength, the idea that we should accept the world, from the human perspective, as being a cesspit of suffering, and in the face of that point overcome despair by actively affirming life. Indeed, “live dangerously” is a recurring motif in Nietzschean aphorisms, especially in The Gay Science. Another may be the cryptic figure of the mule, from which hangs “jewels and binoculars”. We return here to book four of Thus Spoke Zarathustra (although the image, too, is recurrent throughout his oeuvre), where the mule is among the party of guests of ‘higher men’. Indeed, in the dialogue called The Festival of the Mule, the Mule is decorated and worshipped on account of its constant affirmation to all questions (note a donkey’s cry sounds similar to the German ja). I have noted some other links as we have gone along, I have overlooked a number more, what stands is that, at the very least, there is an uncannily Nietzschean character reappearing throughout the song.

“if you dig deep enough, anything starts to look like a shelf”

The remaining question is whether Dylan would have known about, and been comfortable with, deploying condensed critiques of burgeoning philosophies? In a word, yes. This is the same character who would pass comment on Carl Von Clausewitz, refer to Petrarch, who would go on to boil down the ideas of Levinas and Polyani in the more exotic excursions in Desire (an album with such an apt name and profound undercurrent that it deserves another essay in its own right). Hell, this wouldn’t even been the last time he mentions Nietzsche, who crops up again, this time by name, in the epic Joey, also on Desire.

It’s all quite a lot to stomach, especially for ends that are purely academic. Those who have made it this far can be treated to a confession, this by no means is the end, and probably isn’t even on the right track. The problem with the creation of ‘bottomless songs’ is that, if you dig deep enough, anything starts to look like a shelf. Even if coherent, at least two thirds of the song remains unexplained. Why does “Mona Lisa have the highway blues”? Why does the fiddler write on the back of “a fish truck that loads?” Indeed, why is Louise “delicate, and seems like Vermeer?”

Iterative versions, which mercifully do exist, will hopefully shed more light upon it, as will additional approaches from a plethora of sources. But for now we have some further food for thought to digest as “these visions, of Johanna, they conquer my mind.

1 Forgive the superficial account, Romanticism was an incalculably expansive social rhizome that can’t truly be condensed into a couple of sentences. Matters from Rousseau to Runge, interesting though they are, will have to remain at the wayside.

2 Remarkably, this link isn’t entirely new. Robert Shelton once likened Visions to Keats’ Ode on a Grecian Urn, which, chronologically, is only one Ode away from being on the mark.

3 The Night-watchman being a recurring figure in book four of Nietzsche’s Thus Spoke Zarathustra.

4 Come on, tell me this has nothing to do with Eternal Recurrence!

5 In line with Nietzsche references, it is speculative, but the giant task of re-valuing all values is posited to have caused the mental collapse of the great thinker. As such, Nietzsche himself suffered an explosion of consciousness.

One thought on “Three Visions of Johanna”