From Grosvenor to Trafalgar Square, a march against Trump, with an estimated 100,000 people in attendance, occurred in London yesterday. For a march against something, the atmosphere of love and hope in the crowd was particularly striking. Yes, they were against Trump – but it was not a march of despair. The weather mirrored the atmosphere of the event: bitterly cold, with a bright and shining sun.

As the crowds descended on Grosvenor Square – site of the American embassy – the excitement started (and my phone, and others, lost signal). Walking through Mayfair, Park Lane, and onto Trafalgar Square there were so many different people from various walks of life. Women, men and children all gathered – one young boy’s placard read ‘Donald Trump is a gangsta’. Another baby snoozing happily in their carrier had a sign attached reading ‘future feminists for equality’. I could hear British and American accents interspersed with multiple different languages. It was a unification like no other, bringing together all types of people in solidarity, not only with those in America, but also with others marching across the world. 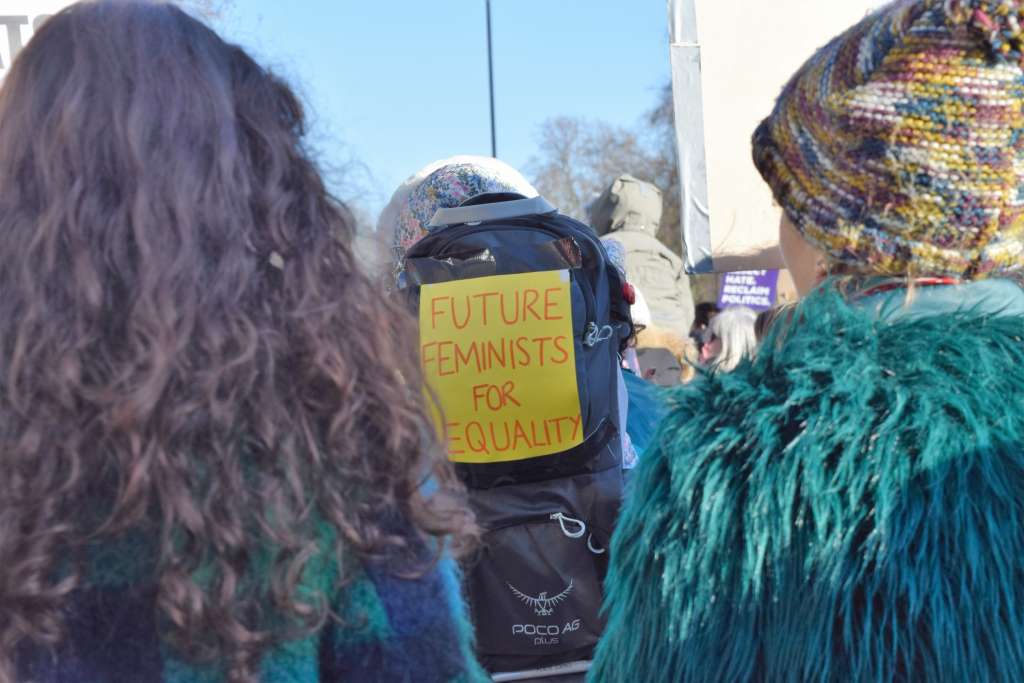 During the march it was relatively quiet. From time to time there was the cry of ‘What do we want?’, ‘Equality!’, ‘When do we want it?’, ‘Now!’. There were also a few people playing the Les Mis song, ‘Do you hear the people sing?’ – which always brings out the revolutionist in me. Despite very little chanting, cries of jubilation spread through the crowd like a Mexican wave, demonstrating how large the movement really was as the voices could be heard from further and further away.

Arriving in Trafalgar Square we were met with our host for the protest: Sandi Toksvig, co-founder of the Women’s Equality Party. Funny and charming as ever, she led us through various speakers from MPs to actors. Speaking to the crowd, Toksvig said:

The other speakers raised various other issues, beyond the basic issue raised by Trump’s election. The systemic issues of sexism, particular to the UK. The 50:50 Parliament movement was represented by Isabel Adomakoh Young, advocating more women in Parliament – with the goal of achieving a 50:50 ratio. A powerful speaker, the writer and actor convinced me to sign the movement’s ongoing petition, and its campaign #AskHerToStand, is trying to encourage more women into politics. Labour MP Yvette Cooper also spoke, bringing me close to tears as she talked about Jo Cox and her extraordinary legacy. The march became so much more than a fight back against one man, but rather about what he represents – and what he is symptomatic of – a world in which open misogyny can get elected to one of the highest offices in the world.

The point of the movement was made most powerfully by Tanya Moodie, the actor. She argued that ‘we have begun what cannot be undone’, and in these words embodied how I felt during the march. It felt like the beginning of a movement, an uprising against the tides of despair many have felt increasingly during the past few years. Donald Trump may have just been inaugurated as the 45th President of the United States: but he is just one man standing before crowds of determined people across the world. The conviction shown at the Women’s March cannot be resisted. London was only a small part of a worldwide movement that will not bow down to bullying.