With a combined following of over 3,000,000 on ‘the big three’, England Rugby trumps the web presence of any other team competing in the Six Nations. If you’re living, working, or studying in the UK and haven’t liked the Facebook page, it’s almost a guarantee that at least 10 of your Facebook friends have. So with the final day of the tournament and the potential for England to win the Grand Slam, here’s a lowdown of how the brand maintains their vast online following:

England Rugby’s Instagram page promises ‘exclusive content from inside the England Camp’. This largely includes short clips of the team training in pristine kit. While on the surface this might seem a light hearted and easy way for the social media (SM) team to produce content frequently (not to mention a conveniently subtle plug on behalf of O2 and Canterbury), the comments section tells a different story. Users tag friends in these videos commenting on the most ‘rugby’ element of what is shown. One comment on a short clip of Jonathan Joseph practising reads ‘I’ve watched it 20 times and I still can’t get it right’. These users are clearly rugby players who utilise the content for a very wholesome purpose which is simply to improve their own game. This kind of interaction reflects the ideologies of the #getintorugby campaign started by World Rugby and endorsed continuously by England Rugby, both online and on TV ads during games.

By far the most popular posts however are the simple yet elegant graphics which typically inform of the members of the team who will be playing in an upcoming match as well as the pictures of gameplay super-imposed on live score updates. 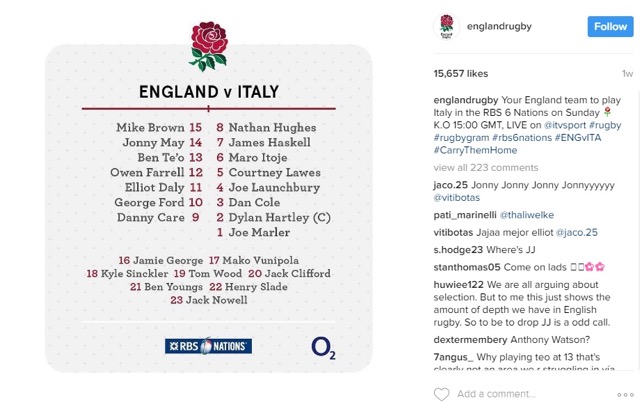 Users are then able to flex their rugby knowledge in the comments section by debating the choice of team members and commenting on the gameplay during matches – although these comments are often lost amongst the many variations of ‘C’mon lads!’ followed by a stream of rose emojis. 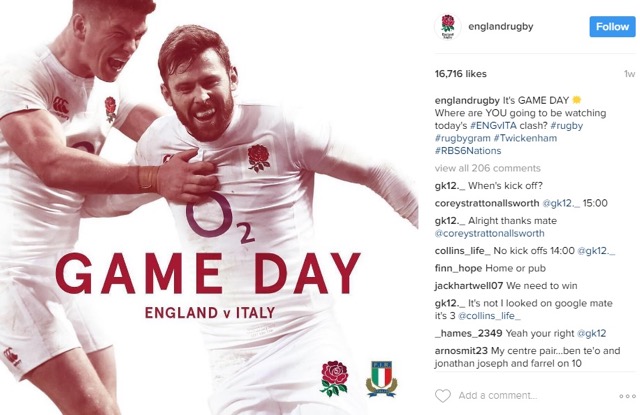 Unfortunately these posts highlights how vastly gendered the sport still is. In the examples below, the exact same method is used to let users know in one simple post the final score of both the men’s and women’s Six Nations matches against Italy. Despite the visual concept being the same, the difference in likes is immense. 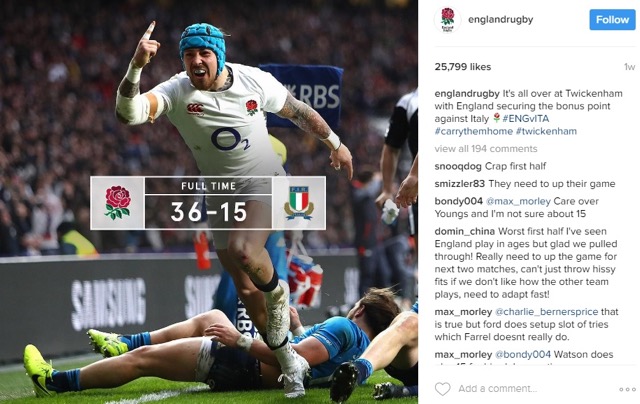 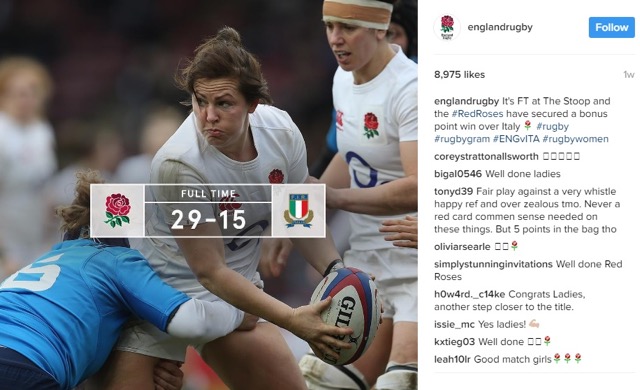 The England Rugby Twitter acts as slightly less aesthetically cohesive extension of the Instagram. Meaning that despite posting the same video/photo/graphic content as the Instagram due to the character restriction the posts seem to focused more on directing users via a bit. link to a longer post on the official England Rugby website. However the examples below show how both the Twitter and Instagram are inconsistent when providing followers with crucial information, the key one I have noticed is the kick off time of an upcoming match. 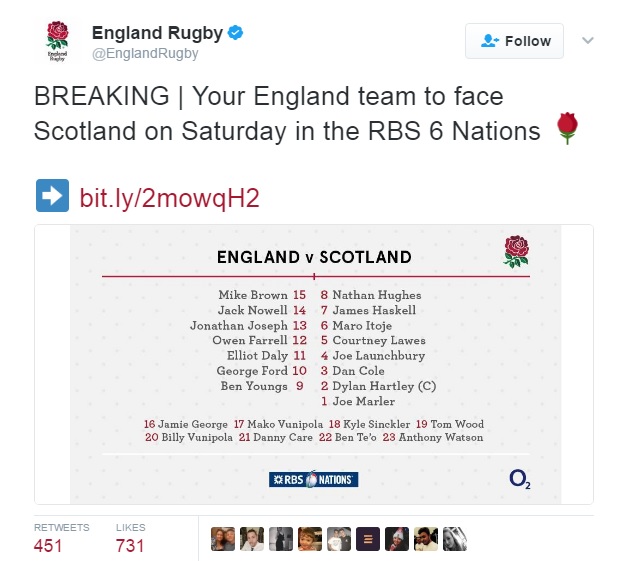 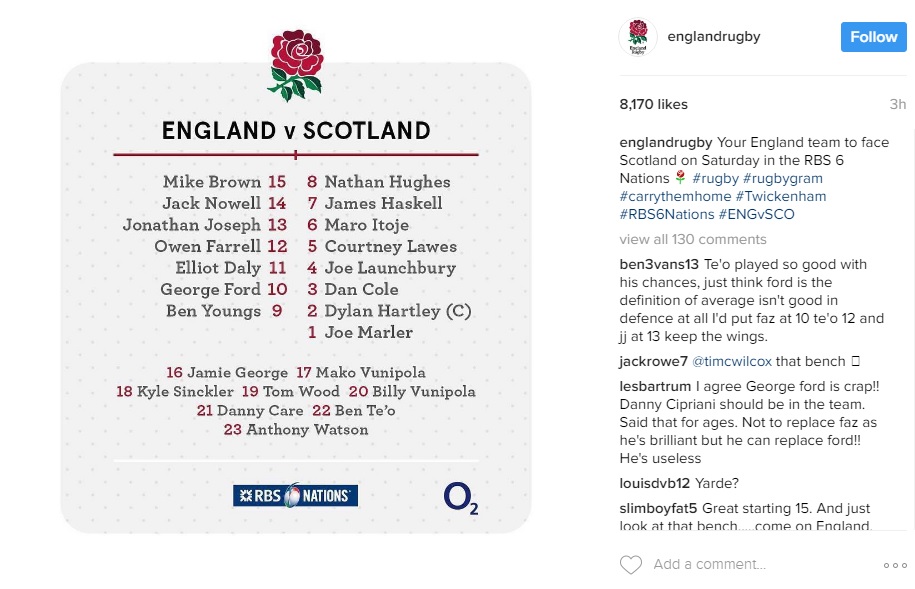 This is an inconsistency the SM management team need to fix, and you can tell it’s a problem simply by looking at how many people comment on the posts asking ‘When’s kick-off?’, which isn’t helped by how, unlike most retail or public service companies, the England Rugby accounts don’t respond directly to user queries via the comments section.

Despite this blip, something the England Rugby Twitter demonstrates very well is the ability to create clear and engaging hashtags, which are used in a clean and informative format in the text body of the tweet. 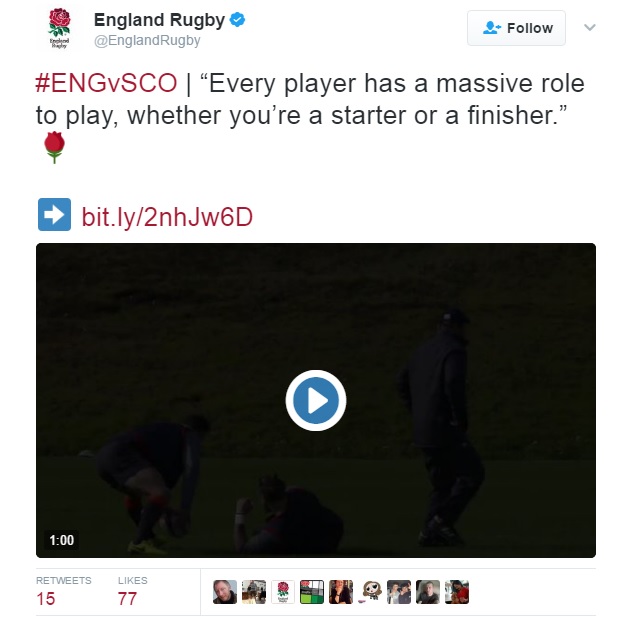 The match hashtag is ideal for followers to use when live-tweeting during the match, although it seems as if you’re not in for much chance of a like unless you @ them. As for a retweet? Forget it, they’re strictly reserved for wider rugby organisations, team players, and sponsors.

It’s not a stretch to assume that links to the official website posted to Facebook get more clicks than those posted to Twitter. Yes the Facebook has over 1,000,000 more followers than the Twitter account but also because links just look better on Facebook. The Facebook Developers tool assures that external links will always be presented nicely before appearing on people’s newsfeed. The pictorial header, the title and the tagline all appear neatly in one post, and thanks to clickbait culture we as an audience are simply more used to tapping through to an article, only to return to our newsfeeds 3 seconds later. 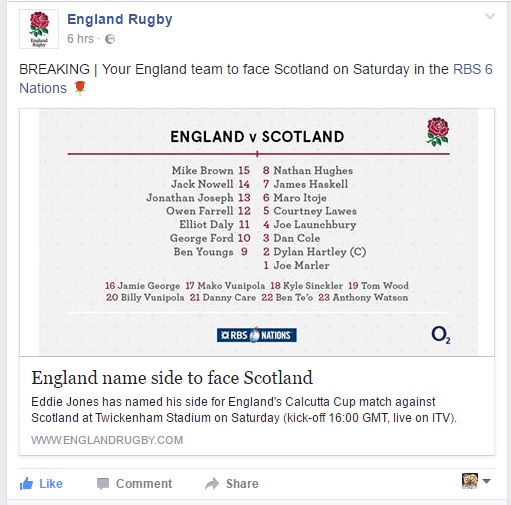 However even on the England Rugby page video content is king; while an external link to a brief history of the England/Scotland rivalry gets 700 likes, a video celebrating Johnny Wilkinson’s 47th birthday gets nearly 9000. The SM team clearly recognise this, which is why on average every other post to the ER Facebook is a carefully pitched, comment-worth video; an apt example might be a clip of the under-20’s team doing the bottle flip challenge.

This was a surprise, it would be no stretch to assume that everything posted to the Facebook page was also on YouTube and yet there is a clear difference in the type of content posted to each. If the majority of the video content posted to Facebook is fun, tag-ready fodder for the aimless scroller, YouTube is where the ‘serious rugby’ happens. Typical uploads include in-depth game analysis as well as the match-highlights which are sent out in email newsletters. Ironically, the video which has over triple the views of any other video on their channel, with more views than they have subscribers, is an interview with Owen Farrell – I guess no matter how good your game is, it’s better if you’re photogenic.

The number of followers England have on Snapchat is unknown but it’s probably a lot less than the big three as they continue to plug the handle on all of the above. The use of the Snapchat account is sporadic to say the least; sometimes we get a few slo-mo clips of the team training when they’re at Twickenham, but otherwise it’s reserved mainly for when the team arrives at the stadium to play a match. Still, it’s an effective way to reach fans with video content in near-enough real time, as Snapchat content doesn’t demand the same attention to quality to be engaging like Facebook or YouTube.

The immediacy and accessibility of the Snapchat footage highlights the conglomerate effect of being connected with the team across multiple platforms. If you’re unable to watch live on a television it arguably doesn’t matter as the combined effect of the live mixed-media updates across all platforms means a moment won’t pass you by without a notification.

Social Media Manager. After contributing several social media analysis articles to The Panoptic I was very kindly asked to help boost the online profile as well as using social media to help with recruitment. Remember to follow The Panoptic across all our social media channels!

One thought on “#CARRYTHEMHOME – How England Rugby Wins Social Media”