An intrepid explorer as well as a keen artist, David Bellamy is a man of many talents. Arctic Light: An Artist’s Journey in a Frozen Wilderness successfully exemplifies this, pairing frozen landscapes sensitively captured in watercolour with sharp and funny anecdotes of the trials and tribulations faced during Bellamy’s countless expeditions.

Having perused an early copy of Arctic Light about a month ago, I headed to the official launch of David Bellamy’s latest book at Stanford’s with an amalgam of feelings and expectations. Thoroughly impressed by the quality of the paintings and sketches within the book, and captivated by the educational yet laid-back style of writing retained throughout the book, I was both excited and slightly intimidated to meet Bellamy. Luckily, I was not disappointed; greeted with a glass (or three!) of Prosecco, I spent the night listening to Bellamy reading excerpts from the book, embellished with even more quirky anecdotes about the difficulties associated with steering a sled, and the surprising usefulness of gin in thawing a frozen paintbrush. Chatting to both him and his wife, it was clear to see that both possessed a deep curiosity about the world beyond their home in rural Wales, and a desire to capture it on paper for others to see. 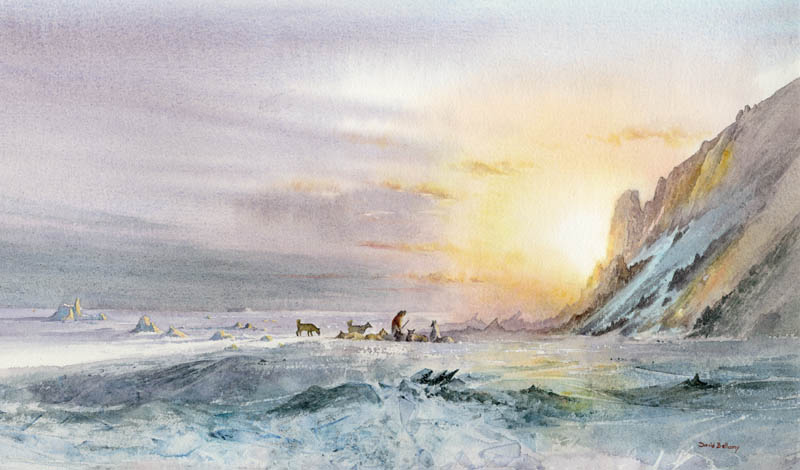 Bellamy’s entertaining personality is just as tangible in writing as it is in person, a trait often characteristic of successful writers. Without skimping on details of the technical aspects of his explorations – such as the limitations associated with settling on watercolour as a medium within sub-zero temperatures – Bellamy retains a conversational tone throughout the book, which succeeds in keeping the reader invested within his many stories. His background as a teacher of art, first and foremost, is likely helpful in achieving this; the first person perspective gives him the air of a story-teller, whilst maintaining the right amount of detail to make the book an informative (as well as entertaining) read. For me, it is his dry sense of humour that sets Arctic Light apart from the other publications released by Search Press, making it an accessible read for all (including those without an extensive background in art, like me).

The book is… an honest insight into the inner workings of the mind of a travelling artist.

However, Bellamy’s ability to fluidly transition from a chatty anecdote to a sensitive, poetic account of an ethereal frozen world so far from our own shouldn’t be disregarded. His writing matches his artwork perfectly; they succeed in promoting the reader from a stranger looking in from the outside, to a personal  companion of Bellamy. As such, a piece of non-fiction writing – which so often runs the risk of becoming dry and difficult to persevere through – is able to maintain the attention of the reader just as easily as if it were an action-packed novel, an achievement that I greatly admire. The book is filled with a variety of different illustrations, ranging from epic, Turner-like watercolour landscapes, to the simple sketches quickly created on location, providing an honest insight into the inner workings of the mind of a travelling artist.

Although light-hearted, Arctic Light manages to touch upon a number of philosophical questions. A recurring theme throughout the book is the beauty of travelling, and what it is that gives people this hunger to see more of the world (despite the multitude of risks and inconveniences that accompany any explorer). Bellamy discusses the cultural differences that he noted between himself and those native to numerous secluded, snowy parts of Greenland, as well as – perhaps more strikingly – the number of similarities that existed, despite being from what often feels like two completely different worlds. Aesthetically, Bellamy’s beautiful paintings make Arctic Light the perfect coffee-table book, with the added bonus of it harbouring a wealth of funny, fascinating and frank content within.

David Bellamy’s Arctic Light is available for purchase here. Furthermore, David and his wife are running a multitude of different courses over the coming months – if you’re interested, you can find more information by clicking here.

You can purchase David Bellamy’s ‘Artic Light’ on Amazon.

Dominyka, having recently finished her studies at UCL, is enjoying getting stuck into all things creative. A dancer, illustrator, and writer, her greatest passions are accessibility, interdisciplinary work, and wine.