“How clean are your clothes?” probes the tagline for Riverblue, a powerful film that shows the high cost of low cost clothing.

“I came across an image of a river in China called the Pearl river,” says director David McIlvride, “and it was a shot from space, and you could see the river had turned blue. It was an indigo blue and it was all from the pollution of making blue jeans.”

Riverblue, competing for the ‘best documentary’ title at Raindance film festival, is full of striking images like the one McIlvride describes. It chronicles and exposes the appalling levels of pollution that people in ‘developing’ countries live and work with on a daily basis. It viscerally shows the high cost attached to low cost clothing, especially blue jeans.

In Dhaka, Bangladesh, we see tannery workers with no protective clothing treating leathers with noxious chemicals, before dumping the runoff into the Buriganga river. Further downstream, images show people bathing in the same waters that are deep blacks, oranges, purples. Children in these areas report not being able to smell. Skin diseases – rashes, ulcers, boils – are widespread. Pollution, often carcinogenic, enters the food chain too: a boatman is filmed bringing a haul of fish to shore. He found them floating on the surface of the black water, dead, we learn. He is going to use some to feed his family and sell the rest at a local market.

The film quickly shows that neither individual factories nor rogue industrialists are to blame. This is a systemic problem, driven in part by consumer demand for cheap clothing in wealthier countries.

The ‘developed’ world embraced free trade in the 1980s and 90s, resulting in the closure of the biggest textile factories in America and Europe, previously the hubs of global production regulated by strict pollution laws. The textile and leather industries were just two of many pollution-heavy industries that shifted across the planet towards the end of the twentieth century. In pursuit of lower priced goods, higher profit margins from cheap labour, and nonexistent regulations, factories sprung up in China, India, Bangladesh and Indonesia. Simultaneously, demand, production and pollution ballooned as the west embraced the hedonistic rush of no-strings-attached cheap clothing. 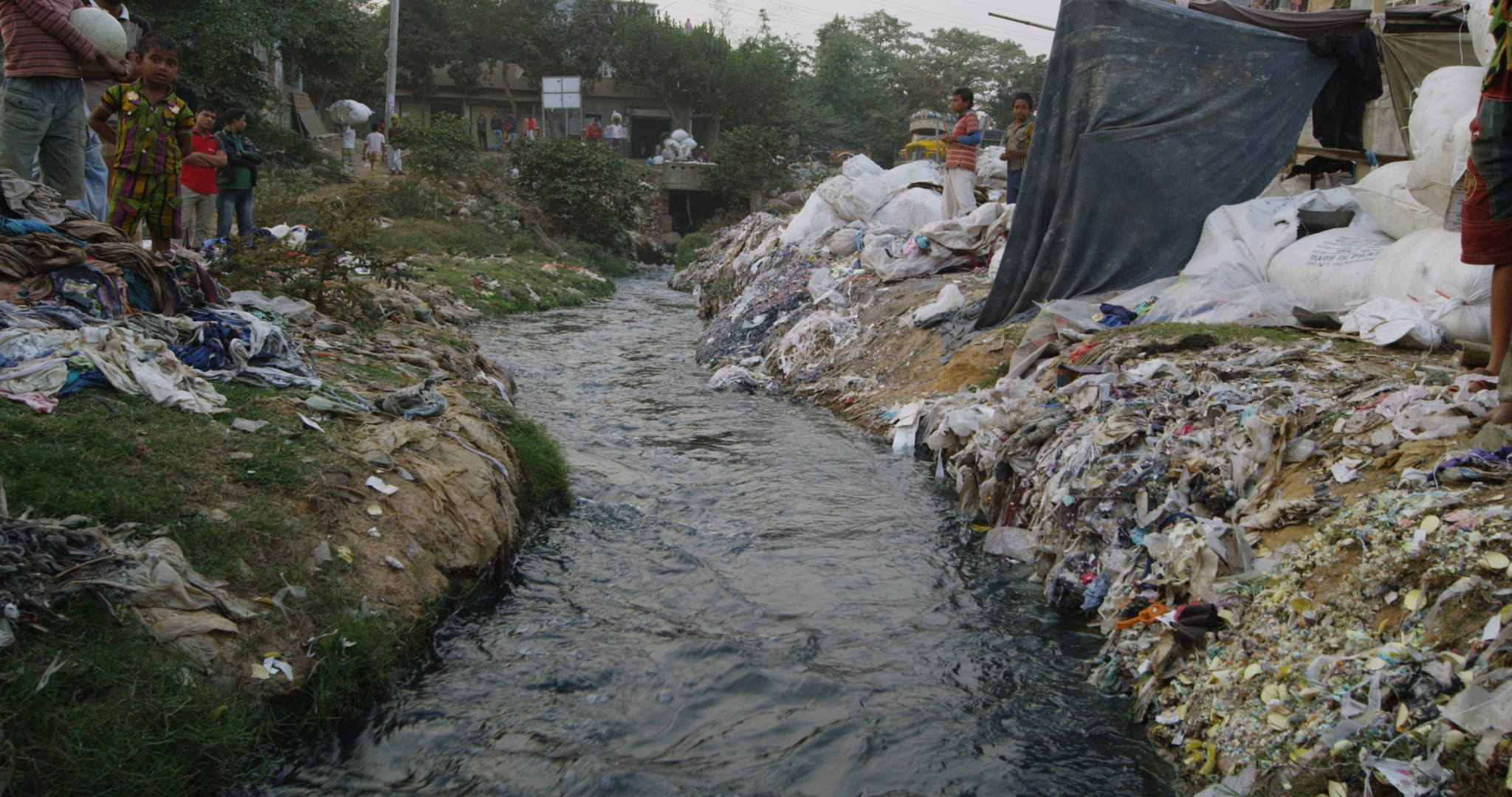 Riverblue could have done better in spelling out the ideology at the root of this phenomenon, neoliberalism. It only devotes a short segment to the history, and seems to place more of the blame on consumers’ buying habits than structural flaws. The filmmakers are certainly radical environmentalists, but they structure their activism very much within the bounds of capitalist acceptability. Filming in China, the film’s presenter Mark Angelo warns viewers (with no hint of irony) that it is because they are in a communist state that they must watch their backs, else the companies responsible for the pollution come after them.

We are told, in the final quarter of the film, that we need to shift our buying habits towards new forms of denim production that only use a fraction of the water, and new forms of ‘distressing’ jeans that use lasers instead of noxious chemicals. The filmmakers take consumer demand as a constant and as something that must be worked around, never violated. The new technologies showcased at the end of the film were impressive, but the last segment felt a little too much like a PR campaign for sustainable jean manufacturers.

The images in the film were so powerful that I certainly will think twice about my choices the next time I shop for clothes.

Only from a slate of text at the very end of the film do we learn that Greenpeace’s disruptive protesting (Greenpeace Detox Campaign) has prompted some of the biggest brands in fashion to pledge a detoxification of production by 2020. The film devoted little space to this, yet lots to massaging consumers into consuming more ethically, not consuming less, or worse, engaging in disruptive protest.

I felt like maybe this was justified pragmatism: the images in the film were so powerful that I certainly will think twice about my choices the next time I shop for clothes. But “voting with your dollar” activism can only go so far, especially when many people have little choice but to buy cheap clothing. Any lasting change, especially on a level as critical as the environment, must come from the top and be systemic. If Riverblue had stressed this, it would have been a flawless documentary. Even so, it is a powerful film that I urge everybody who wears clothes to watch.