It is estimated that we throw away 2.5 billion coffee cups every year but less than 1 in 400 are actually recycled.

I will admit to consuming about two cups of coffee a day. It is great for the fatigue but overall it is detrimental to my bank account and terrible for the environment. The Environmental Audit Committee estimated that we throw away 2.5 billion coffee cups every year but less than 1 in 400 are actually recycled.

The latter issue was something I never considered. Cup after cup I freely dispose in the bin. I am even guilty of not letting them meet their fate down the ‘mixed recyclables’ hole. Karma eventually caught up with rising prices I continuously seem to pay for a less-than-average latte.

Since moving to London, my coffee love/addiction continues to grow. Again, a student on even more of a budget, I willingly throw my money at Pret A Manager which rules London Victoria and my favourite independent coffee stores across London.

To ease the financial damage, I came up with what I thought was a genius idea: to get my own thermal coffee cup. I was willing to suffer the consequences of downgrading to instant coffee.
It was not until I heard through the grapevine: “Do you know you get 50p off in Pret if you take our own cup?” My life soon changed.

The problem with standard coffee cups is the plastic lining used inside them to make the paper cup waterproof. The lining and the cups contamination with liquid alongside the plastic lids make the cup largely non-recyclable despite their alleged recyclability. Plastic takes hundreds of years to breakdown and therefore harms the environment particularly harming animals.
Pret are not the only company to offer a discount to combat the problem. Although, they are the first to double their discount to 50p off for reusable cup customers which they introduced in January 2018.

Starbucks for years has offered 25p off for customers who bring their own cup. They even started charging customers 5p if they did not have a reusable cup across 35 London stores this year.
Café Nero does not offer discount but doubles customers loyalty’s points on their paper stamp cards or through their app. Allowing customers to get twice the amount of free coffee.
Waitrose is the latest to tackle the issue in a more controversial move by allowing its loyalty customers to get free tea and coffee from the self-service machines only if they bring their own reusable cup. The scheme will be rolled out across all stores by Autumn 2018 saving more than 52 million cups a year.

So why do only 1% of people in the UK use own cup discount?

A survey of 220 followers of my Instagram account found that the majority do not use a reusable coffee cup: 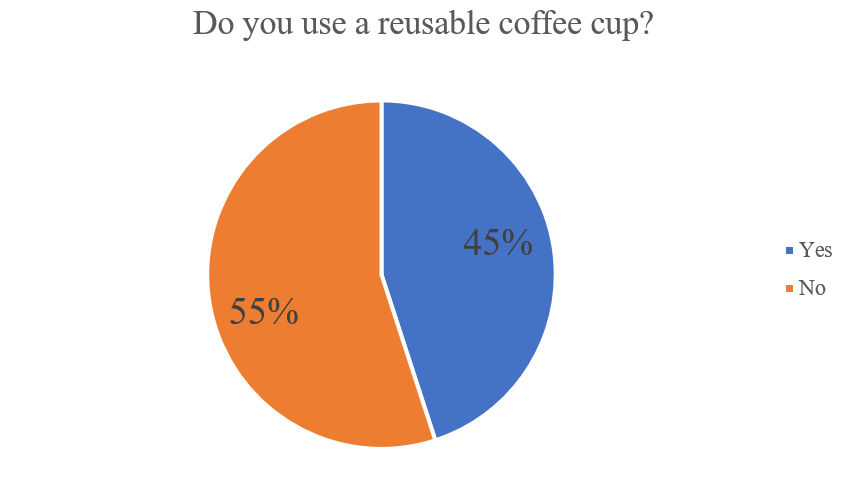 Perhaps it is because of the investment in the reusable cups themselves, the effort of carrying it to and from work and the hygiene aspect of it. It is a real commitment to own one of these cups. They need a lot of attention.

It is very easy to make back the value of your cup and they are really easy to get a hold of. Starbucks sell their own branded cup for £1 and have a wide range of own cup merchandise that can cost up to £17. Amazon and chain supermarkets like Tesco, Sainsbury’s and Waitrose also has a wide variety of cups on the shelves.

With this talk about saving the planet, David Attenborough breaking hearts with Blue Planet 2 and the government being advised to introduce a mandatory ‘latte levy’ of 25p by the Environmental Audit Committee. I realised I really underestimated how much of a change this will have on people’s lives and the environment, both for the better.

The Environmental Audit Committee for the UK Government found 1 in 5 of us visit a coffee shop every day and they theorise that the growing popularity of coffee shops means the problem is expected to get worse. Less than 1% of cups are recycled and half a million cups are littered in the UK everyday. As a result, the government has threatened to get rid of all disposable coffee cups if the cups are not all recyclable by 2023.

The World Wildlife Fund (WWF) revealed in a new report that the UK will throw away a third more single use coffee cups by 2030 and the UK’s overall plastic waste will rise from 5.2 million tonnes in 2018 to 6.3 million tonnes.

There has been one store that has an alternative solution to the waste problem, helping save the planet for three years without the fuss of reusable cups or harming the environment. Black Sheep Coffee in London uses compostable vegeware cups and lids, meaning their cups are 100% completely recyclable and benefit the environment completely instead of damaging it.

Gabriel Shohet, co-founder of Black Sheep Coffee said: “In my view offering a 25p or 50p discount is a good first step and helps raise awareness around the issue of waste but it is not enough to have meaningful impact. The reality is that very few people bring their own cups to their local coffee shop, even when offered a discount.

“Our view is that there wouldn’t be a need to incentivise people not to use takeaway cups if takeaway cups were biodegradable in the first place. If we can do it, big chains can do it too.
“I hope everyone in our industry takes a leap forward and don’t wait for regulations to catch up before taking action.”

I decided to ask other Londoners their opinion on re-usable cups and what they think about the move away from plastic. It left me wondering do we use reusable cups it because we want to save the planet or is it because saving every penny counts in our pockets? For me, it’s both but at least I am trying.

Molli is orginally from Glasgow living in London. She likes all things cultural, historical, investigative and music that sounds good.

One thought on “Coffee lovers and the environment”